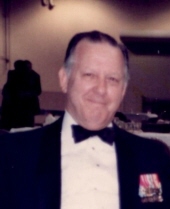 George E Guerieri, Sr., 86 of Southaven, MS, passed away February 25, 2014.
He was a highly decorated Retired US Army Officer and served as a Mississippi State Senator for 12 years. Mr. Guerieri served at the end of WWII as a sailor on a Hospital Ship, he later served in the Korean War and the Vietnam War, as well as in the Office of the Chief of Staff of the Army at the Pentagon in Washington DC. Decorations include the Army Legion of Merit and the Vietnam Cross of Gallantry with Silver Star, among many others.
As a Senator in Mississippi he authored the very first state Racketeering laws in the country and was recognized by President Reagan for such. Colonel Guerieri was married to the late Jewel Abel Guerieri and also preceeded in death by a son, George Guerieri, Jr.
He is survived by a daughter, Judy Hobdy of Anniston, AL; a son, Ron Guerieri of Madison, MS; along with 7 grandchildren; and 5 great grandchildren.
George Guerieri served as chairman of the Military Order of World Wars' Memphis Chapter and the President of the Southaven Rotary Club as well as President of Christ the King Catholic Church's Parish Council and Knights of Columbus. He was a leader of men, a true patriot and a wonderful committed husband and father. He will be missed by many.
Visitation will be Saturday, March 1, 2014, 9:00-10:00 a.m. with a Funeral Mass immediately following beginning at 10:00 a.m. at Christ the King Catholic Church on Church Rd in Southaven. Graveside services will be held in the family section of North Cleveland Cemetery in Cleveland, MS at 2:00 p.m. Saturday all under the direction of Ray Funeral Home.

To order memorial trees or send flowers to the family in memory of George Guerieri, please visit our flower store.
Send a Sympathy Card