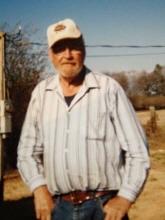 Mr. Lenard Earl McCown, 74, of Cleveland passed away Wednesday, April 13, 2016, at Joy Health and rehab. All friends and family are invited to a celebration of his life 12:00 p.m. Saturday, April 16, 2016, at 51 Jones Rd. on Beulah Lake. Mr. McCown was born in Cleveland, MS on May 16, 1941, to Joe McCown and Vivian Allison McCown. He was a farmer most of his life, and later he worked in trucking. In his spare time, he enjoyed traveling, riding motorcyles, and he also greatly enjoyed fishing especially after his retirement. He is preceded in death by his parents, Joe and Vivian McCown. Mr. McCown is survived by his children, Debbie Lamb Bowen of Greenwood, Lisa Griffin of Indianola, Christina Hammonds of Cleveland, Thomas McCown of Ocean Springs, and Connie Brown of Richmond, TX; 11 grandchildren; 10+ great-grandchildren; 3 brothers; 2 sisters; and a host of nieces and nephews.

Gathering of Friends and Family

To order memorial trees or send flowers to the family in memory of Lenard Earl McCown, please visit our flower store.
Send a Sympathy Card