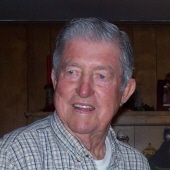 Robert Glen "Brick" Mason, 83, of Cleveland, passed away Saturday, June 6, 2015, at North Sunflower Medical Center. Visitation will be 10:00 to 10:45 a.m. Tuesday, June 9, 2015, at Ray Funeral Home. Graveside services will follow beginning at 11:00 a.m. in North Cleveland Cemetery. Mr. Mason was born on July 30, 1931 in Jackson County Arkansas to Harvey Franklin Mason and Cleo Mason. He was reared on a farm outside Clarksdale, Mississippi in the Sunflower Community as part of a large family. He attended and graduated from the Sunflower Consolidated School in Coahoma County. He attended Sunflower Junior College at Moorhead, Mississippi where he earned his nickname, "Brick" from his football coach.
Brick enlisted in the Army and served for two years following Jr. College. Brick continued his service to our country through the National Guard for 27 years. He was called back to service during the Berlin Crisis. He retired from the Guard in 1990.
Following his enlistment in the army he attended Delta State Teacher's College in Cleveland on a football scholarship. He played football and baseball while getting his Bachelor's degree in Math. This is when he met Rose M. "Took" Litton. They married and settled in Cleveland, Mississippi with their three children. He taught all types of mathematics and coached football, baseball and basketball in the Bolivar County Schools. He later went back to obtain his Masters Degree in Education Administration at Delta State University. Following his advanced education, he was elected Superintendent of Education in Bolivar County in which he served for thirteen years. During his tenure, he served on the Board of Mississippi Delta Community College and Coahoma Community College. He continued his service to Coahoma Community College after his retirement and has served the institution for thirty-six years. Coahoma Community College has flourished during Brick's tenure. He was recently honored by Coahoma Community College when the new allied health services school was named in his honor. In 2010, Brick was elected Alumnus of the Year at Mississippi Delta Community College. He was inducted into the Coahoma County sports hall of fame in 2013. He is probably most known for the wonderful funny stories he told. They were long, but the punch line was always worth it. He loved farming, and he loved his family. He was preceded in death by his son, Robert G. "Bob" Mason Jr., his parents Harvey Franklin Mason and Cleo Mason and six siblings. He is survived by his wife, Took Mason, and his two daughters, Beth Redditt (Bill) from Cleveland, Ms and Brook Williams (Ed) from Brandon, Ms. He has three grandchildren Ann Marie Myers (Jeffrey) and Ryan Redditt from Cleveland and Mikie Williams from Brandon. He has two great grandchildren, Mattison Myers from Cleveland and Eli Williams from Brandon.

To order memorial trees or send flowers to the family in memory of Robert G 'Brick' Mason, please visit our flower store.
Send a Sympathy Card