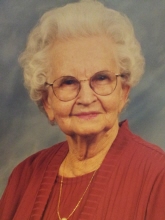 Vivian Marguerite Long (Jones), 97, of Columbus, MS, passed away in Columbus, MS on Sunday, January 20, 2013. Visitation will be held 10:00-11:00 a.m. at Gunter and Peel Funeral Home on Tuesday, January 22, 2013. A Celebration of Life Services will follow beginning at 11:00 am Tuesday, January 22, 2013, at Gunter and Peel Funeral Home with Rev. Sammy Crawford officiating. A second Celebration of Life Service will be held 11:00 a.m. Wednesday, January 23, 2013 at Mt. Pleasant Baptist Church in Plumerville, AR, under the direction of Ray Funeral Home. Interment will follow in Mt. Pleasant Baptist Church Cemetery.
Mrs. Long was born in Plumerville, AR on March 3, 1915. She was married to John Dee Long on December 24, 1952. She worked as a telephone operator for ten years. She was a member of Linn Baptist Church for 20 years until 1983, a member of Hollandale Baptist Church until 2000 and a member of Fairview Baptist Church in Columbus.
She is preceded in death by her parents, Divid G. Jones and Winnie Pearl Hawkins Jones.
Mrs. Long is survived by her brother, Leon Jones (Delores) of Blytheville, AR; sister, Martha Black (Bill) of Hot Springs, AR; son, Jay Long (Linda) of London, AR; daughter, Sharon Brunson (Mike) of Birmingham, AL; son, Larry Long (Sue) of Columbus, MS. She has 5 grandchildren and 5 great-grandchildren.
To view and sign online guestbook, go to www.rayfuneralhome.net

To order memorial trees or send flowers to the family in memory of Vivian Long, please visit our flower store.
Send a Sympathy Card