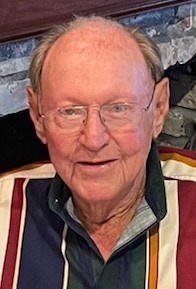 Alcee Trahan, the world’s best father and grandfather peacefully took his last breath at 5:50 am, March 3, 2022, in the company of his loving sons after a brief illness. He was preceded in death by his beloved wife Phyllis Dexter Trahan and his parents Adolph and Olive Whittington Trahan. He joins other family members who have gone before him-his sister Elda Gaspard and Selvina Gerard, and his brothers Victor, Felician and Savy as well as his brother-in-law Benson Dexter and sister-in-law Dot Hester. Alcee is survived by his sons Randy (David) and Stan (Laurie Grisham) and the stars of that lit his world-his grandsons Connor and Colt Trahan. Other survivors are his sister Fay Young, brothers Clarence (Catherine) Robert (Sabel-deceased), and his wife’s siblings Earl Routh Jr. (Yvonne), Trudie Weeks (Charles) and Sara Barnes (Charlie). Trahan loved his family unconditionally. Because his job as a boat (dredge) captain took him all over the world, he sacrificed nine months every year to allow his children to have a stable education. He always looked forward to the three glorious months each summer when his wife, Phyllis and sons Stan and Randy traveled to wherever he was at various waterfront locations around the globe. But more importantly they all always cherished the time spend together as a family. Truly the joys of his lifetime were his two grandsons, Connor and Colt. Watching Connor become an adult and start his own successful business gave him great hope for Connor’s future. Hearing Colt master the electric guitar and excel at Trap while still in middle school was an endless source of pride (and bragging rights!) Family was everything to our Dad. He loved Laurie and David as if they were his own children-not just in-laws. No doubt he leaves a big hole in his family’s heart however they have a lifetime of memories to cherish. Graveside services will be held at the Beulah Cemetery, Beulah, MS Saturday, March 19 at 10 am where Tray will finally be reunited with his wife- the love of his life. In lieu of flowers, please consider donations to St. Jude Children’s Research Hospital (stjude.org) or Just Love Your Neighbor (justloveyourneighbor.org) or the charity of your choice. Services will be handled by Lake Lawn Funeral Home in New Orleans and Ray Funeral Home in Cleveland, MS

To order memorial trees or send flowers to the family in memory of Alcee Trahan, please visit our flower store.
Send a Sympathy Card