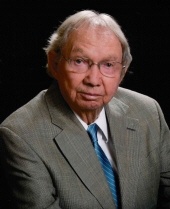 Alexander Valentine (A.V.) Henry was born in Pace, MS in 1919 where his parents operated the post office. He attended the Pace Consolidated Schools and graduated as Valedictorian in 1936. His farming career began in 1938 with a one-row planter pulled by a mule. The following year, he married Robbie Holloway Henry, and for almost 60 years, they lived and reared their three children in their home situated on the Bogue Phalia south of Pace. A.V. was extremely active in the Pace Methodist Church where he served as Sunday School Superintendent and taught Sunday School for over 20 years. At the beginning of WWII when the railroad rails were utilized for the war effort, A.V. added to the family income by hauling 100 lb. bags of fertilizer from railroad facilities to local farmers in Cleveland and Rosedale. As the war progressed, he continued the use of his flawed truck to haul bales of cotton from several gins to the compress in Rosedale and also hauled coal to the schools. A.V. was active in the Lions Club of Pace and also the Bolivar Co. Farm Bureau where he served as president. He and Robbie joined the MS Chapter of the Delta Rose Society and grew beautiful roses for which they received many awards. Throughout his life, A.V. was a hunter and an avid fisherman. After retiring from farming and following the death of his spouse, A.V. moved into Cleveland where he became a member of the First United Methodist Church. And this story would not be complete without mentioning the last 15 years of his life which were enriched by the wonderful companionship of Flo Findley, a lifetime friend. A.V. enjoyed life and most recently celebrated his 100th birthday with over 75 family members and friends. So much more could be said about a life of 101 years, but there is no doubt that our Lord is saying, "Well done, good and faithful servant." He is survived by his children, Norman Henry (Sherry), Robbie Jo Henry McInnis (Jay), and John B. Henry (Anne); grandchildren, Paige Henry Brown (Steve), Christopher Klinck (Amanda), Kara Klinck Vega, John McInnis (Susan), Beth Henry, Jonathan Henry (Andee), Jo Anne Henry, and Robbie Henry Comans (James); and his great-grandchildren, Alex Brown, Matthew Brown, Ethan Klinck, Drew Klinck, Mary Grace Klinck, Lexi Axelsen, Lizi Axelsen, Anabela Vega, Alexander McInnis, Jackson McInnis, Maxwell McInnis, and Stephen Shea Brown. Memorials can be made to First United Methodist Church or the charity of your choice.

To order memorial trees or send flowers to the family in memory of Alexander V Henry, please visit our flower store.