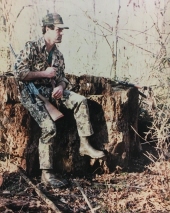 Mr. Andrew Monroe Wynne Westerfield, 70, of Merigold, passed away Thursday, October 11, 2018, at his home.  A Memorial was held 3:00 Sunday, October 14, 2018, at First United Methodist Church in Cleveland with interment in Merigold Cemetery.
Andrew was born in Greenwood, MS, on October 23, 1947, to James Augustus Westerfield, M.D. and Shirley May Wynne Westerfield.  He grew up in the town of Merigold and as an adult, made it his lifetime home. He attended Cleveland High School and graduated from Columbia Military Academy in 1965 with a letter in track.  He attended Mississippi State University and joined Sigma Chi Fraternity where he was the social chairman.  Following graduation in 1969, he enrolled in the University Of Mississippi School Of Law.  After receiving his degree, he entered into the practice of law with Jack Hatcher in Cleveland in 1972. Andrew finally went on to start his own law firm as a partner with Westerfield, Janoush, and Bell continuing his practice for a total of 46 years.

Andrew's passion was the great outdoors.  He grew up hunting and fishing with his father at Merigold Hunting Club, where his grandfather Dr. A.M. Wynne was one of the founding fathers of the club in 1911.  Andrew shared his passion for hunting with his two sons, James Westerfield and Jon Andrew Westerfield.  Andrew was a board member of Merigold Hunting Club on an off for over 30 years and served as President for 18 of those years.
Andrew was elected Mayor of Merigold in 1974.  He served the town for 44 years until his passing.  Andrew was the pillar of the community of Merigold and helped make Merigold the great community it is today.
He opened a small restaurant in Merigold in 1984, called Crawdad's.  Over the years he remodeled and rebuilt it into the institution it is today, one of the most well-known restaurants in the Mississippi Delta.

He led an ambitious life. He sought to help others and opened doors for many people.   He was a loyal friend and an unparalleled mentor who was loved by many as evidenced by those whose lives he touched.
He is preceded in death by his father, James Augustus Westerfield, M.D.; and his brother, Jim Westerfield.
Andrew is survived by his mother, Shirley Wynne Westerfield; wife, Lady Kim Brown Westerfield; sons, James "Jack" M. W. Westerfield and Jon Andrew Wynne Westerfield (Kirsten) all of Merigold; granddaughter, Ella Grace Westerfield; constant companion, Dakota; and a host of cousins, aunts, and friends.
Pallbearers were Dr. Jon Meyer, Jim Meyer, Ed Meyer, Philip Carby, Warren Bell, Tom Janoush, Tommy Gregory, Tommy Gary, Ken McGarrh, Albert Junkin, Pat Wynne, and Hunter Nowell. Honorary pallbearers were the Town of Merigold Board Members, Boyd Atkinson, Edna Loyd, Nick Hayes, and the past and present crew of Crawdad's.

To order memorial trees or send flowers to the family in memory of Andrew Monroe Wynne Westerfield, please visit our flower store.