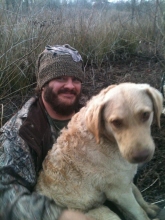 James Andrew "Andy" Jackson II, 47, of Darling, MS, passed away on September 8, 2017, at Regional Medical Center in Memphis, TN. Visitation will be 1:00 to 2:00 p.m. Saturday, Septemebr 23, 2017 at Ray Funeral Home.  Memorial services will immediatly follow beginning at 2:00 p.m. with freinds and family sharing stories and celebrating his life.
Andy was born on October 14, 1969, to James Odis Jackson and Ernestine "Tina" Webb Jackson in Marks, MS. He graduated high school from Delta Academy and went to Northwest Community College as well as Delta State University.
Andy was a talented realtor working in places over the years such as Atlanta and Denver.  He later returned home to farm. He had a kind heart and would do anything for anybody in their time of need. Andy loved all kinds of music and toured with as well as managed many of the bands he enjoyed listening to. He was also a skilled guitarist himself.
One of his favorite times of the year was duck season when he managed Muddy Waters Hunting Club; you could often find Andy in the duck waters from early morning or late afternoon hunting or assisting others in their hunt. When he wasn`t on the farm or hunting, Andy spent time with his beloved dogs Ruben, a Boykin spaniel, and Abby, a Chesapeake Bay retriever.
Two of his favorite places to be were Loveland, Colorado, his home for numerous years, and The Clark Place, the land where his hunting camp was and had been part of his family's history for numerous years.
He is preceded in death by his grandparents, James A. Jackson and Gunelle Mask Jackson, and Ernest Webb and Jessie B. Webb; and brother, Casey Jackson.
Andy is survived by his parents, James Odis and Ernestine "Tina" Jackson of Darling; sisters, Malinda Smith (Larry) of Batesville and Lisa Miller (Jimmy) of Pleasant Grove; uncle, Roger Webb (Marie) of Walls; aunt, Elizabeth Heatherley (Larry) of Seymour; nieces, Meghan Linton (Shawn) of Linn and Cici Brasell (Tres) of Batesville; special cousins, Justin Webb and Brittany Dodson (Jeremy) of Senatobia; two great nephews, Collier and Pace Linton of Linn; beloved friend who are like family, David Young, Sox Richardson and Joe Williams; Godchild, Eason English; and a large amount of extended family and friends.

To order memorial trees or send flowers to the family in memory of Andy Jackson, II, please visit our flower store.