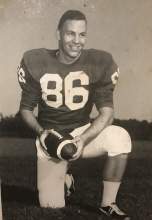 Arthur Kendall Causey, 77, passed away Tuesday, January 15, 2019, at Baptist Medical Center in Jackson, MS. Visitation will be 5:00 to 7:00 p.m. Thursday, January 17, 2019, at Ray Funeral Home. A Celebration of Life Service will be at 11:00 a.m. Friday, January 18, 2019, at First United Methodist Church with Rev. Will Wilkerson officiating. Graveside services will begin 2:00 p.m. Friday, January 18, 2019, at Holcomb Cemetery.
Arthur was born on October 27, 1941, to George and Lattice Causey in Hattiesburg, MS. During his High School years, he played in the Mississippi All star game in both basketball and football. Arthur went on to play football for Mississippi State for one year then Delta State for three years. On July 4, 1963, he married Glenda Gray in Meridian, MS. He worked as conductor and brakeman for the Illinois Central Gulf Railroad for over 20 years; then in the Cleveland School District as a purchasing officer from 1980 to his retirement.
Arthur was a member of the First United Methodist Church in Cleveland. He received the "Good Turn Award" in the Boy Scouts in 1974 for his service to Pack 34 and served as the Director of the Pinewood Derby.
Arthur supported the Cleveland High Wildcats by joining the Cleveland High School Booster Club, where he served as an Executive Board Member and then President from 1981 to 1982. In 1990, he served Director of the Cotton Doubles Tennis Tournament, as well as played in many sanction tennis tournaments throughout the state, and served as the Co-Director of the United Way Tennis Tournament. Showing support to his community, Arthur served as the President of the Cleveland Tennis Association and the Director of the Cleveland Tennis Association Tournament.
Arthur was a huge Nascar fan who attended many Talladega races, and he was an avid collector of Hot Wheels. He could often be found at the Knights of Columbus building playing Bocce and chatting with his friends. He loved his sons and grandchildren and supported them by attending many of their athletic and racing events.
He is preceded in death by his parents, George and Lattice Causey; sister, Beth Causey; and brother, George Causey.
Arthur is survived by his wife of 55 years, Glenda Gray Causey of Cleveland, MS; sons, Ken Causey (Rachel Paris) of Jackson, MS and Kelly Causey (Karen Rossetti) of Koscuisko, MS; grandchildren, Grey Provis (Krista), Pauline Causey Hensley (Hunt), Carly Causey, Kasey Causey, Kendall Glenda Causey, Kody Causey, and Michael Causey; great-grandson, Wyatt Provis;  brothers; Monte Causey (Penny) of Destin, FL and Mike Causey (Diane) of Brandon, MS; and  in-laws, Lagatha Russell (Steve) of Weaverville, NC, Eleanor Umphlett (Winn) of Ridgeland, MS, and Linda Gray of Oxford, MS.
Pallbearers will be Keith Watson, Lance Canoy, Grey Provis, Michael Causey, Kody Causey, Buddy Gray, Hunt Hensley, and Geary Jackson. Honorary pallbearers will be Joe Aguzzi, John Aguzzi, Wallace Boyd, Don Fitzgerald, Liberty Cash, Phillip Rizzo, Michael Rocconi, Johnny Capocaccia, Jerry Bullock, Ronnie Aguzzi, Jerry Dallas, and Bobby Ware.

To order memorial trees or send flowers to the family in memory of Arthur Kendall Causey, please visit our flower store.