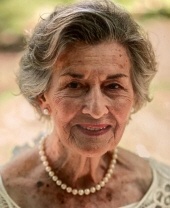 BARBARA ANN (WILSON) VARNER, b. 17 Dec 1930, d. 29 Dec 2020. Barbara Ann Wilson was born in Greenville to W J Bryan Wilson, and Minnie Lee (Allen) Wilson. Her paternal grandparents were Maurice Wilson and Alice Lillian Hunter, both of Middleton, Tenn. Her maternal grandparents were John Clarence Allen of Sunflower, and Minnie Lee Moore of Winona. She grew up in Greenville, taking great interest in music and tennis. At age 17 she and her partner won the Mississippi High School mixed doubles championship. In her senior year she was voted Homecoming Queen, Most Beautiful and was a cheerleader for several years.
After graduation from Greenville High School, she attended Stephens College in Missouri for two years, where she was an organ and piano major. Then she transferred to Ole Miss, pledging Chi Omega Sorority. She met her future husband, Henry Rogers Varner, of Pace, at Ole Miss, and married in March 1952. They moved to Houston, Texas, where their first son, Rogers, Jr., was born in 1953. In 1955 they moved back to Cleveland, and stayed. Two more sons were born, Bryan Wilson (1955), and Michael Hunter (1960). Barbara and Rogers made a home and instilled their loves of music and tennis to their sons. They also were very involved with the Boy Scouts, and all three sons achieved Eagle. She served several positions with the Boy Scouts; Den Leader, Troop Commissioner, and Troop Committee. Both Barbara and Rogers, Sr., were lifelong members of First United Methodist Church. She served as the BSA Chartered Representative until her death. Her involvement with Boy Scouts prompted a love of the outdoors, and she and the family spent long weeks during summers on camping trips out west. In 1966 until the mid 80s, Barbara and her family often went skiing in New Mexico and Colorado.
Barbara returned to competitive tennis when her sons were older, often teaming with Carolyn Henry of Indianola at tournaments. They initially earned the top state ranking, and later were ranked in the Southern sectional at #1. The pair rose to national rank, and won over 30 tournaments together. In the mid -70s, Barbara saw there was a need to restart a women's tennis program at Delta State, which was last functioning in the 30s. She became the women's coach in an unpaid position. She coached the team for several years, gradually recruiting better players who won several titles for DSU. Barbara was inducted into the Mississippi Tennis Hall of Fame in 2015, and the DSU Coaches Hall of Fame in 2016. Her love of music was continual and a great joy. She played often at Church, and guided her youngest son Michael to become an accomplished musician. Her husband picked back up his drumsticks due to her encouragement, and her oldest son began playing in the DSU jazz band.
In later years Barbara loved her garden and Bridge Club, and enjoyed the comradery and competition. She was a member of the Daughters of the American Revolution, and believed strongly in patriotism and respect for our country. She is survived by three sons: H. Rogers Varner, Jr., m Mary Helen (Ola); Bryan W. Varner, m Lynn (Walton); Michael H. Varner, m Allison (Pridgeon). Her grandchildren are: Barbara Lane (Cross) of Birmingham, Sarah Overton of Aspen, CO; Michael Hunter, Jr. of Memphis; Maxwell Allen of Memphis; Henry Rogers., III of Nashville; and Frances Elizabeth of Cleveland. She has one great grandson, Wilson Cross of Birmingham. She had a sister preceding her in death, Jane Allen (Wilson) Sutherland. A graveside service at the New Cleveland Cemetery will be held at 11a, Wed, 30 Dec. Donations in her memory can be made to the Methodist Church (318 S. Court, Cleveland MS 38732); Boy Scout Troop 23 (325 Cotton Row, Cleveland, MS 38732); and the Delta State Tennis Team (1003 W Sunflower, Cleveland, MS 38733).

To order memorial trees or send flowers to the family in memory of Barbara Ann Varner, please visit our flower store.