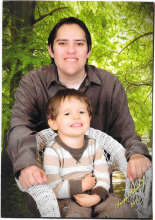 Mr. Benjamin James "Ben" Contreras, 31, of Cleveland, passed away Thursday, August 13, 2015, at Bolivar Medical Center. Visitation will be 9:00 to 10:00 Saturday, August 15, 2015, at Ray Funeral Home. Celebration of Life services will immediately follow beginning at 10:00 a.m. Saturday, August 15, 2015, at Ray Funeral Home with Rev. Larry Braswell officiating. Interment will follow in McNutt Cemetery in Schlater, MS. Ben was born in Helena, AR on January 23, 1984, to Benjamin Contreras and Pamela Kay Denton Contreras. He graduated from Cleveland High School in 2002, and furthered his education by obtaining a degree in Criminal Justice. In the Police Academy, he graduated top in his class in firearms, and in childhood he obtained a brown belt in karate. He worked for many years as a Deputy in Desoto County, and was an instructor in Close Quarter Combat with the Desoto County Sherriff's office.
He enjoyed playing MMO games and listening to music. Most importantly, he loved his family. His son Alexander was his whole world. He is preceded in death by his grandparents, Frank Contreras and Alfa Contreras. Ben is survived by his son, Alexander Contreras of Southaven; mother, Pamela Contreras of Cleveland; father, Benjamin Contreras of Horn Lake; grandmother, Bernice Smith of Cleveland; and stepbrothers, Blake Contreras and Braxton Contreras both of Horn Lake. Pallbearers will be Charlie Frost, Michael Jennings, Ronnie Counts, Thomas Counts, and David Jennings. In lieu of flowers, the family asks that donations be made to The Texas Institute of Surgery and/or Reed Migraine Center in Dallas, TX.

To order memorial trees or send flowers to the family in memory of Benjamin James 'Ben' Contreras, please visit our flower store.
Send a Sympathy Card