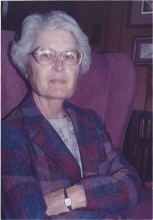 Betty Jean Smith Conger, 88, passed away on Monday, November 23, surrounded by her children. Visitation will be 12:30 to 1:30 p.m. Saturday, November 28, 2015, in Evans Annex at the Benoit Union Church. A celebration of life service will immediately follow beginning at 1:30 p.m. at Benoit Union Church with Rev. Andy Ray officiating. Interment will be in Old Cleveland Cemetery.
Born in Tupelo, Mississippi on March 20, 1927, Betty Jean was the first of three daughters of Claud Franklin Murff Smith and Orville Filgo Smith. She had an active childhood, playing with neighborhood children and spending time on her father's farm. She was an excellent student and graduated from Tupelo High School in 1944. She attended Mississippi State College for Women, now Mississippi University for Women, and was a member of several social clubs there. She graduated in 1948. In August of that year, she married Thomas Benjamin "Ben" Conger, and they made their home in Benoit, Mississippi, where she lived for 63 years. Together they raised three children, Sara Ann "Sally," Margaret Elizabeth "Betsy," and Claud Benjamin. Betty Jean taught in the Benoit schools as well as at Bayou Academy in neighboring Boyle, Mississippi. She was a member of The Daughters of the American Revolution and was an avid reader, at one point stating that she had likely read every book in the Cleveland library. She was a lifelong Methodist and was active in the Benoit Union Church and in United Methodist Women. She and her family were members of the Benoit Outing Club. She was a loyal friend, retaining friendships from high school and college throughout her life. When she relocated to Houston, Texas, in 2011, she met and enjoyed new friends. She was a proud grandmother to Howard "Blake" Williamson, John David "Dave" West II, and Parker Nicholson West. She took particular delight in her great-grandchildren Holder Benjamin West, age 6 1/2, Miller Nicholson West, age 5, Kayden Tanner Williamson, age 4 1/2, and Kennedy Mae Williamson, 19 months old.
Betty Jean was preceded in death by her parents and her husband.
Survivors: children, Sally Williamson of Richmond, TX; Betsy Conger West of Chapel Hill, NC; and Claud Conger of Crystal Beach, TX; grandchildren, Blake Williamson and wife Ashlee of Richmond, TX; Dave West and wife Aja of Deland, FL; and Parker West of Chapel Hill, NC; great-grandsons, Holder and Miller West of Deland, FL; great-granddaughters, Kayden and Kennedy Williamson of Richmond, TX; sisters, Mary Ann Simpson and her husband, George, of Tupelo, MS; and Sara Jane Davis of Fort Worth, TX; many cousins, nieces and nephews. Pallbearers will be Gus Hogue, David Hogue, Bill May, Don Conger, Rodney Mills, and Jim Lowe. In lieu of flowers, the family gratefully requests memorials to the Alzheimer's Association, Mississippi Chapter, 196 Charmant Drive, Suite 4, Ridgeland, MS 39157.

To order memorial trees or send flowers to the family in memory of Betty Jean Conger, please visit our flower store.
Send a Sympathy Card