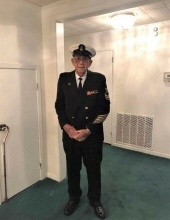 Bob Martin 83, of Cleveland, MS was called home to be with his Lord and Savior on February 18, 2020 at home. A visitation honoring Bob will be held Sunday, February 23, 2020 from 5-7PM at Ray Funeral Home. A Celebration of Life Service will be held Monday, February 24, 2020 at 1PM at Ray Funeral Home. Burial will be in the North Cleveland Cemetery following the service.
Bob was born on November 28, 1936 to MR. Dwight & MRS. Maggie Martin in Houston, MS where he grew up and attended school. After high school Bob went on to join the Military and Served in the United States Navy "SEABEES" He served in the Vietnam war, as well as serving in many different parts of the world. After retiring he married the love of his life Wilma Rogers on August 01, 1979 . Bob owned and operated Martin Electric for over 30 years. Along with his own business he worked for Baxter Co. for 17 years until retiring. He was a member of Cleveland Church of God. Bob was a true hero who sacrificed his life for the freedom of his family and country. Most of all he was loving husband, father, grandfather, and great grand grandfather who will be missed dearly.
Bob is preceded in passing by his parents, Mr. Dwight Martin & Mrs. Maggie Martin., his stepson, Micheal Parker his siblings, Wilma Janet Martin, Doris, Pat, Karl, Maynard, George, DL,Martin.
He is survived by is loving wife of 40 years, Wilma Rogers Martin of Cleveland, MS; six children, Denise Martin of Ocean Springs, MS, Donna(Douglas)Brooks of Greenville, MS, Jimmy Martin (April) of Leland, MS, Monica Parker of Merigold, MS, Roger Parker(Lisa) of Cleveland, MS, Rebekah (John) Duda of Horn lake, MS; six loving grandchildren; and six loving great-grandchildren.
Pall Bearers: Christopher Parker, Jeremy Parker Gardner Parker, Roger Parker, Josh Hobbs, John Duda Bro. Greg Chamblee will officiate the service.

To order memorial trees or send flowers to the family in memory of Bob Priest Martin, please visit our flower store.