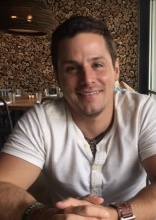 Randal Brett Hutchison, 34, of Cleveland, MS, passed on July 29, 2019, in Jackson, MS.
Brett was born on June 17, 1985, to Randy and Debbie Hutchison in Shelby, MS. He owned and operated the Jolly Roger in McGehee, AR then moved to Jackson, MS where he was a licensed real estate agent. Brett was passionate about music and attended live shows any chance he could get. He was also a nature lover, enjoying various outdoor sports and activities. His athletic ability was evident throughout his life as he excelled in many sports such as soccer and tennis.  He held a special place in his heart for being an uncle to his nieces, nephews, and best friend's children.
He is preceded in death by his paternal grandparents, Mr. and Mrs. Clyde Hutchison of Cleveland, MS.
Brett is survived by his parents, Randy and Debbie Hutchison of Cleveland, MS; sisters, Sadie Blackwell (Bobby) of North Little Rock, AR and Riley Adams (Blake) of Cammack Village, AR; nieces, Macy Blackwell and Nora Blackwell; nephews, Hutch Adams and Hank Adams; grandparents, Mr. and Mrs. Roger Greenway of Hot Springs, AR; and aunts/uncles, Bill and Debbie Powell of Cleveland, MS, Bryan and Denise Greenway of Franklin, TN, and Brad Greenway and Kasandra Adams of Hot Springs, AR.

To order memorial trees or send flowers to the family in memory of Brett Hutchison, please visit our flower store.