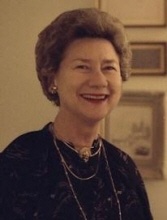 Catherine Williams Graves, 88, passed away in Memphis, TN on Saturday, July 25, 2015 at the age of 88. Visitation will be 10:00 to 11:00 Thursday, July 30, 2015, at First United Methodist Church in Cleveland, MS. Service will follow beginning at 11:00 a.m. Thursday, July 30, 2015, at First Methodist Church, Cleveland, MS with Rev. Will Wilkerson officiating. Interment will be in the New Cleveland Cemetery. She was born September 13, 1926, to Wirt Alfred Williams and Nina Rayner Williams in Cleveland, MS. She was a member of Evergreen Presbyterian Church of Memphis. Catherine was graduated from Cleveland High school and from the Delta State Teachers College with a Bachelor of Arts degree. She received her bachelor of journalism degree from the University of Missouri at Columbia where she was a member of Chi Omega, Kappa Tau Alpha, honorary journalism fraternity and Gamma Alpha Chi, honorary advertising fraternity. She was elected to Who's Who of American Students in American Colleges and Universities. She was associated with the National Cotton Council in Memphis and accompanied the 1952 Maid of Cotton on her international tour.
She was preceded in death by her parents, Wirt Alfred Williams and Nina Rayner Williams; and brothers, Wirt Alfred Williams, Jr. and Randolph Rayner Williams.
She is survived by her husband, William Caruthers Graves, III of 62 years, and was the loving mother of her two sons William Rayner Graves of Cordova, TN and Randolph Wirt Graves of Madison, MS.
The family wishes to extend their sincere gratitude to caregiver Ruby Owens and the wonderful staff at Belmont Village. In lieu of flowers, donations may be made to the charity of choice.

To order memorial trees or send flowers to the family in memory of Catherine Williams Graves, please visit our flower store.
Send a Sympathy Card