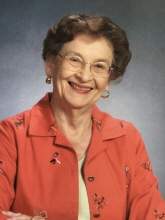 "Tiny" was a homemaker and very dedicated wife, mother, and grandmother.  She was born on November 26, 1919, in Belzoni, MS, to Celeste Brian Carpenter and H.A. Carpenter.  The Sullivan family lived in Cleveland, MS, for sixty years and were members of the First United Methodist Church.  She moved to Sunnybrook Retirement Home in Madison, MS, in 2006.

To view and sign the online guestbook, go to www.rayfuneralhome.net

To order memorial trees or send flowers to the family in memory of Celeste Carpenter Sullivan, please visit our flower store.