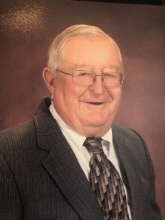 Charlie Herbison passed from this life on June 06, 2019. A visitation honoring  Charlie will be held Tuesday, June 11, 2019 from 1-2:30P.M. at Ray Funeral Home in Cleveland, MS., A Graveside Service will follow in the Shaw City Cemetery  at 3:00 P.M.
Charlie was born September 02, 1940 in Longshot, MS  to Frank & Elizabeth Herbison. Charlie grew up in the Longshot/Benoit, MS area with many cousins and other family members, graduating from Benoit High School in 1958 and later attending MDJC(Morehead).
Charlie spent over 47 years working in the cotton warehouse industry for Federal Compress and Whse Co living in Ruleville, Greenwood, Drew, Canton, Belzoni, and Collierville, TN. After retiring, he was able to live his life long dream of farming in Benoit with family members for several years. He was an avid outdoorsman, never happier than when deer hunting, duck hunting or fishing with his grandchildren and various extended family members and friends. Charlie seemed to know everyone in his beloved "MS Delta'and this 6 degrees of separation was proven when he would strike up a conversation with a random person and quickly discover a mutual connection much to the amazement of his grandchildren. Charlie was blessed with an abundance of treasured family and friends. He was well respected in his community, touching lives, strengthening those around him, and living life to the fullest.
Charlie is preceded in death by his loving wife of 32 years, Jewel Willingham Herbison; Father, Frank Herbison; Mother in Law, Flora Willingham; Brother Larry Herbison; Grandson, Charles Braden Herbison; and Vera Thomas Herbison.
Charlie is survived by his daughter, Lynn Herbison Calhoun and her husband Clay of Oxford, MS; his son, Chuck Herbison of Brandon, MS; grandchildren, Whitney Lynn Herbison, of  Memphis, TN, Hunter Calhoun of Starkville MS, and great granddaughter, Macei Jewel Justice of Memphis, TN. He is also survived by his mother, Elizabeth Pentecost Herbison of Cleveland MS; brother, James Vernon Herbison and wife Janet of Denton, TX; his first cousin Betty Jane Farmer Maxwell, the sister he never had, as well as several nephews, nieces, geat nieces, and various cousins, too many to mention.
While his passing brings us much sorrow, there is comfort in the knowledge that he is once again reunited with his loved ones, most especially his beloved Jewel.

To order memorial trees or send flowers to the family in memory of Charles Charlie Herbison, please visit our flower store.