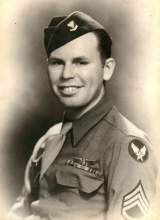 Mr. Charles Franklin Brock, Sr., 94, of Cleveland, MS, passed away on August 3, 2017, at Walter B. Crook Nursing Facility in Ruleville, MS. Visitation will be held from 10:00 to 11:00 a.m. on Saturday, August 5, 2017, at Drew Baptist Church. Celebration of Life Services will follow beginning at 11:00 a.m. on Saturday, August 5, 2017, at Drew Baptist Church with Rev. Steve Napier officiating. Interment will be in Drew Cemetery.
Charles was born on August 29, 1922, to Henry Dewey Brock and Fay Lord Brock in Wade, MS. After high school Charles became a welder and made military ships in Connecticut. He volunteered for World War II, he served in the Army Air Force with the 455th Fighter Group on the Liberator and flew 50 missions. Charles always praised his pilot and crew members for their hard work and dedication to their service when they served together. Gerry and Charles attended multiple Air Force reunions with his crew of 10. They continued to send gifts and Christmas cards until the past few years when most of them passed away. His son, "Charlie", was able to enjoy these reunions when Gerry refused to fly to the different sites. Charlie and his dad really enjoyed this time spent together.
Charles enjoyed being a rural mail carrier and he spent several hours at the old country stores when on the job. He enjoyed his fellow workers, to mention a few, Roy McCain, Bernard Booth, Billy Manning, and Frank Kaplan. Charles told so many tales about the post office that one might have wondered if he was at work. They really had fun while on the job and developed lifelong friendships.
Charles served his Lord with all of his heart while on this Earth. He was known as a leader in the Drew Baptist church. Charles taught Sunday School for years and was the Director of Sunday School at one point. He was an active Deacon for 50 years and also cooked hundreds of brotherhood breakfast for 50 years. His church members were truly his family. As Lyle Ward said, "He was a great leader because he was a great follower".
He is preceded in death by his parents, Henry Dewey Brock and Fay Lord Brock.
Mr. Brock is survived by his beloved wife of 69 years, Geraldine Boatman Brock of Cleveland, MS; son, Dr. Charles F. Brock, Jr. (Jan) of Cleveland, MS; grandchildren, Carley Brock of Cleveland, MS, and Laney Regnelli (Peyton) of Cleveland, MS; sisters, Mary Elizabeth Goodwin of Greenville, MS, and Helen Napier of Jackson, MS; daughter-in-laws, Jan Brock and Becky Brock; and a host of nieces and nephews whom he loved dearly.
Pallbearers will be Ralph VanLandingham, Peyton Reginelli, Joey Russell, Truitt Hobby, Tommy Goodwin, Jimmy Russell, John Scott, and Casey Manning. Honorary Pallbearers will be Drew Baptist Church Deacons and Larry Mullins.

To order memorial trees or send flowers to the family in memory of Charles Franklin Brock, Sr., please visit our flower store.