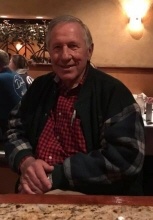 Charles Lynn Fuller, 83, went to be with the Lord on November 9, 2020 in Humboldt, Tennessee. Visitation will be 1:00 - 2:00 p.m. Saturday, November 21, 2020 at Ray Funeral Home in Cleveland, MS with a graveside service immediately following at North Cleveland Cemetery Cleveland, MS.
Charles was born September 10, 1937 in Whynot, MS to Herbert and Pearl Fuller. He had seven brothers and sisters. He received a Bachelor of Accounting at Delta State University in Cleveland, MS in 1963. He was also a veteran of the Marines. Charles married Patricia Ann Holder in November of 1962. He retired in 1995 after 25 years with Phillips & Jordon Inc. as a highly respected Vice President and Chief Financial Officer. His greatest joy in life was his family and spending time with them. Charles always put family first, showed in many ways his love and was an excellent provider. He was an avid outdoorsman, so there was lots time spent with his wife and daughters camping and swimming while living in North Carolina and Idaho. After retirement they returned to Idaho, and the joy of snowmobiling was had by all and many wonderful fishing trips with his daughter Janet Beth. His joy of fishing and hunting led him to many wonderful places such as Alaska, the Yukon, and Africa. His success as a hunter put him into the Boone & Crocket Record Books for his bear hunt in Alaska.
He is preceded by his parents, Herbert and Pearl Fuller; daughters, Laura Lynn and Melanie Ann.
Charles is survived his loving wife, Patricia Ann Holder Fuller, daughter, Janet Beth Fuller; sister, Juanice Fuller Goodman.
A huge heart felt thank you to the awesome private home caregivers Angela Cole, Teresa Tyus, Pamela Stone, Mozella Smith, Delora Bond, Anika Mayfield, and Sabrina Anderson through Home Instead. All the wonderful caregivers became fondly referred as the CG's. Also, a big appreciation to brother-n-law,Thomas Holder of Cleveland, MS in his unending love and support. A huge appreciation and thank you to Charles and Patricia's daughter, Janet Beth, for her steadfast care, obvious show of love and responsibility to her family. All the responsibilities she has taken on has been done with excellence and continues to be simply amazing.
In lieu of flowers the family request donations be made to St. Jude Children's Research Hospital or your local animal shelter.

To order memorial trees or send flowers to the family in memory of Charles Lynn Fuller, please visit our flower store.