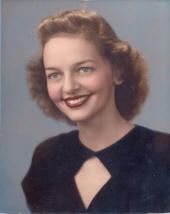 Mrs. Claudine Pyle Davis, 94, of Houston, TX, formerly of Cleveland, passed away Monday, December 12, 2016, in Houston, TX. Graveside services will be held 1:00 Saturday, December 17, 2016, at Delta Heights Memorial Garden Cemetery in Cleveland, MS, with Rev. Michael McLaughlin officiating. Mrs. Davis was born in Helena, AR, on May 28, 1922, to Francis Robert Pyle (who was a "Rough Rider" with Teddy Roosevelt) and Mary Boone Pyle. On May 28, 1947, she married Carl C. Davis, Sr. in Cleveland, MS. She proudly served our Country in the Nursing Corp. at Camp Shelby in Tylertown, MS. She was a member of First Presbyterian Church and was very active there as a Sunday School teacher for many years. Mrs. Davis began working as a bookkeeper in 1947 at Carl C. Davis Printing and Publishing Company and retired in 1972. She was devoted to her family, serving as a den mother for the Cub Scouts and she cared for her mother who was suffering from polio for many years. She was an avid reader, was a master at needle point, was great at decorating, and was very artistic. She is preceded in death by her husband, Carl C. Davis, Sr. and her parents, Francis Robert Pyle and Mary Boone Pyle.
Mrs. Davis is Survived by her son, Carl C. Davis, Jr. (Hillary Jordan) of Houston, TX; and her granddaughters, Mary Martha Davis Hardin and Aubrey Bisping. In lieu of flowers, the family requests donations be made to First Presbyterian Church in Cleveland.

To order memorial trees or send flowers to the family in memory of Claudine Pyle Davis, please visit our flower store.