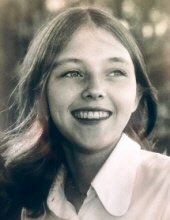 Diane Wilson Jacobs, 68, died on April 13, 2021, in Jackson. A native of Cleveland, Mississippi, and born on March 10, 1953, she was the daughter of Rosemary Wilson Jacobs and the late Charles Clark Jacobs, Jr. Diane had a brilliant mind and was student body president at Lausanne Collegiate School in Memphis before attending Princeton University, where she received her baccalaureate degree in Art History. After living in New York City for several years, she returned home and received a Master of Fine Arts from The University of Mississippi. While at Princeton, Diane studied under Jeremy Gilbert-Rolfe and was influenced by the works of Frank Stella and Mark Rothko. Her own paintings were meticulously planned and spontaneously executed using a variety of materials especially spray paint. She sprayed stencils and objects on the surface of her canvases, and there was not a rock or kitchen utensil that escaped her enthusiastic aim. The results were imaginative, playful, and often irreverent. A gallery or museum visit with Diane was an education in art. She was able to quickly understand an artist's intent and technique and make a painting or piece of art come alive. She taught art at Millsaps College for several years before dedicating herself full time to painting. She was a serious artist until the end of her life. Diane was one of a kind and dearly loved by all who knew her. Her great nieces and nephews have memories of being entertained by toys she invented for them using found objects. She will be greatly missed. In addition to her father, she is preceded in death by her brother, Charlie Clark Jacobs, III. In addition to her mother, she is survived by her sisters, Patricia Alley Denton (Jack, of Clarksdale; Catherine Helen Jacobs of Ocean Springs; and Rosemary Jacobs Crocker of Biloxi; brother, Frank Alley (Ivy) of Jackson; her niece and nephews: Dalton Alley (Kasey) of Austin, TX; Warwick Alley (Elizabeth) of Jackson; Mason Denton of Clarksdale; Kaley Allison Jacobs of Brooklyn, NY; Brazel Crocker of Hattiesburg; Charles Crocker, and Wilson Crocker both of Biloxi; longtime friends, Susan Johnson, of Jackson and John Jopling of Biloxi; and numerous other relatives and friends. A Visitation will be held at 10:00 A.M. at Calvary Episcopal Church in Cleveland, MS on May 6, 2021. A Memorial Service will follow at 11:00 A.M. In lieu of flowers, the family requests memorials be made to Calvary Episcopal Church, 107 South Victoria Ave, Cleveland, Mississippi, 39202.

To order memorial trees or send flowers to the family in memory of Diane Wilson Jacobs, please visit our flower store.
Send a Sympathy Card