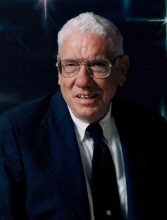 Lee Dickerson Walt "Dickie", 87 of Cleveland passed away December 27, 2019 at Bolivar Medical Center. A visitation will be held at Ray Funeral Home on Monday, December 30, 2019 from 5:00 p.m. to 7:00 p.m. A second visitation will be held Tuesday, December 31, 2019 from 10:00 a.m. to 11:00 a.m. with A Celebration of His Life service immediately following. Interment will be at the New Cleveland Cemetery in Cleveland, MS following the service. Dickie was born on September 16, 1932 to Rufus P. Walt Jr. and Lelia Mae Walt in Cleveland, MS. He graduated from Cleveland High School and received a bachelor's degree in accounting from Delta State as well as played baseball for the Statesmen. He worked for the Mississippi State Department of Agriculture and Simmons & Belk Construction. After marrying Gale McGehee June 1, 1978, they started their own company D&G Enterprises. Dickie was an avid crappie fisherman and a dove hunter. He was a member of the Benoit Outing Club and at the time of his passing was its longest standing member. Throughout Dickie's life he helped more people than most of us will ever meet in a lifetime. Most of all Dickie was a good man who loved the Lord and his family.
He is preceded in death by his parents, Rufus P. Walt Jr. and Lelia Mae Walt; sister, Frances Walt; brother, Rufus Walt III; stepson, Ronnie Parson. He is survived by his wife, Martha Gale Walt of Cleveland; sons, Bruce Walt (Susan) of Brandon, MS and Jim Walt (Cary) of Benton, MS, stepsons, Floyd Parson Jr. (Lisa) of Cleveland, MS and Ricky Parson of Cleveland, MS; stepdaughter, Kathe Wilson of Cleveland Pallbearers will be Hunter Walt, Heath Walt, Christopher Walt, Joshua Parson, Spencer Parson, and Bill Lester.
Honorary Pallbearers are Mims Wilson, Marvin Lott, Barney Chiz, Randy Townsend, Austin Parson and Walt Wilson. In lieu of flowers donations can be made in the memory of Mr. Walt to St. Jude Hospital or Shriners Hospital.

To order memorial trees or send flowers to the family in memory of Dickie Walt, please visit our flower store.