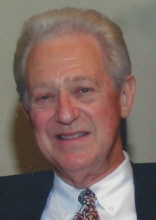 Simon Edward Kossman, Jr., 80, died Thursday, August 31, at Methodist East Hospital, Memphis, Tennessee.  Visitation will be Sunday, September 3rd, from 12:30 to 2:30 p.m. at Ray Funeral Home, Cleveland, MS.  The funeral will be held Sunday at 3:00 p.m. at the Adath Israel Congregation.  Burial will be at the Greenville Jewish Cemetery, Greenville, MS immediately following the service.  The officiant will be Rabbi Harry Danziger; assisting will be the Rev. Dr. Julia Moore.
A native of Washington County, Mr. Kossman was born in Greenville.  He graduated from Cleveland High School and attended Tulane University.  He graduated from Delta State University with a degree in business.
He joined the family business Kossman's in 1959 and became a partner in the business in 1962.  The Kossman dealership sold the entire line of General Motors automobiles and trucks.  Mr. Kossman was selected by Time Magazine as the MS Quality Dealer of the year in 1978.  In 1996 he was elected to serve a four-year term on the Oldsmobile Board of Governance.  He was appointed by Governor Kirk Fordice to serve as a member of the MS Motor Vehicle Commission, a position he held for fifteen years.
He continued his close association with Delta State throughout his life.  He was the founder and a president of the Delta State University Foundation as well as a member of the Board at the time of his death.  Mr. Kossman was selected by the university as its Outstanding Alumnus in 1977 and was also a former president of the Booster Club.
Active in scouting, Mr. Kossman received the Boy Scout Silver Beaver Award in 1996.  He was a current Board member of the Delta Chickasaw Council of the Boy Scouts of America.
He was a member of and past president of the Cleveland Rotary Club and was also a Paul Harris fellow.  He was honored by the Cleveland Junior Auxiliary as King of the Charity Ball in 1986.  He was a current director and former Vice President of the Delta Council.  He was president of both the Cleveland-Bolivar County Chamber of Commerce and of the Bolivar County Industrial Development Foundation.              He was a trustee for the MS Methodist Rehabilitation Hospital as well as a board member and past president of the Flowers Manor Retirement Home of Clarksdale.
Mr. Kossman was president of the Adath Israel Congregation of Cleveland and a director of the Planter's Bank and Trust Company of Indianola.
He is preceded in death by his parents, Simon Edward Kossman, Sr. and Juliet Jacobs Kossman; and brother, Chester Kossman.
Mr. Kossman is survived by his wife the former Kitty Solomon of Greenville, his son Edward III, his daughter Natalie and her husband Heath of Destin, FL, four grandchildren, Aron, Hunter, Sydney, and Shelby; siblings, Dr. Chuck Kossman (Marcia), Juliet Klein (Jery), and Dr. Carol Kossman; and a many loving nieces and nephews.
The family requests that memorial contributions be made to the Adath Israel Temple, the Boy Scouts of America, or the Delta State University Foundation.
To view and sign the online guestbook, please visit rayfuneralhome.net.

To order memorial trees or send flowers to the family in memory of Ed Kossman, Jr., please visit our flower store.
Send a Sympathy Card