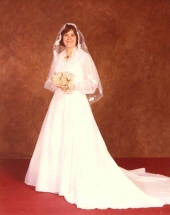 Elspeth Jean Robertson Blakeman, born June 30, 1955, in Alexandria, Virginia, lost her battle with cancer on February 3, 2017. She graduated from Blacksburg High School in 1973, from Sullins College in 1976, and from Maryville College in 1978. In the fall of 1978, she became a candidate for the Master of Library Science degree at George Peabody College for Teachers (now part of Vanderbilt University) and received her MLS in May of 1980. While there, she met her future husband, Randolph Blakeman, who was also a candidate for MLS. On Easter Sunday, April 15, 1979, he proposed and she accepted, and they married at Christ Church (Episcopal) in Blacksburg, Virginia, on Saturday, June 14, 1980. She is preceded in death by her parents, Randall McGavock Robertson (1911-1993) and Florence Dunbar Robertson (1915-2000); aunt, Virginia Keith Robertson (1908-1999); and brother, Hugh Dunbar Robertson (1943-2005). She is survived by her husband of 36 years, Randolph Blakeman of Cleveland, Mississippi; sister, Holly Taylor Mitchell (Jim); sister-in-law, Janet Abernathy Robertson; two nephews, Andrew Robertson (Kate) and Michael Robertson (Katie); two nieces, Carrie Teal Chalmers and Sarah Chalmers Simmons (Godfrey); one great-niece, Morgan Robertson; two great-nephews, Connor Robertson and Sam Simmons; and a host of friends whose lives she touched in so many ways. Visitation will be held on 9:30 to 10:30 a.m. Wednesday, February 8, 2017, at Calvary Episcopal Church in Cleveland, Mississippi. Celebration of Life Services will be on Wednesday, February 8, 2017, at 11:00 a.m. at Calvary Episcopal Church with the Reverend Tim Starnes and Reverend Sylvia Czarnetzky co-officiating. A memorial service will also be held at a later date at St. Mark's Episcopal Church in San Antonio. In lieu of flowers, please consider making a gift to the American Cancer Society and/or Earmarked Ovarian Cancer Society.

To order memorial trees or send flowers to the family in memory of Elspeth Jean Blakeman, please visit our flower store.
Send a Sympathy Card