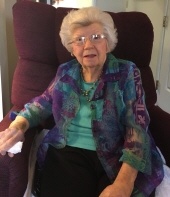 Ethel Bell Morgan Dempsey
Ethel Bell Dempsey 97, of Cleveland, MS was called home to be with her Lord and Savior on August 09, 2019 while surrounded by her family. A visitation honoring her life will be held Tuesday, August 13, 2019 from 10-11 A.M. at Ray Funeral Home with a Celebration of Life Service following at 11:00 A.M.-also at Ray Funeral Home. Graveside service will be held at New Cleveland Cemetery afterward.
Mrs. Dempsey was born on September 23, 1921 in Skene, MS to Mr. William Hayes Morgan & Mrs.  Mary Ressie White Morgan where she grew up and graduated from Skene High School. She was very active in high school functions, and was even on the basketball team, which she loved.  She married her high school sweetheart and the love of her life, the late Mr. Comer Dempsey on August 06, 1943. Mr. Dempsey was a career officer in the United States Army. They spent the next 30 years living in many places and traveling the world. Mrs. Dempsey was a homemaker and vowed early in her marriage to make a happy home wherever they were stationed and she did just that, including her last home which was at the Cleveland Indywood Estates.
Among her many creative talents, Mrs. Dempsey was an expert seamstress and made most of her and her daughters' clothes. She and her family lived overseas several times and she enjoyed collecting unique items for her home that were representative of the country where they were stationed.  Upon their retirement in Cleveland, MS, Mrs. Dempsey was very active in the Cleveland First Baptist Church where she was in the choir, Woman's Missionary Union, Sunday School and the church's decorating committee, among others.  She was a faithful Christian and everyone she knew was inspired by the way she lived her life with grace and love for others. She was a member of the Cleveland Women's Garden Club and loved working in her yard.  Mrs. Dempsey was known to have quite a green thumb and grew beautiful flowers, winning Yard of the Month several times due to her lovely yard and colorful rose garden. Her greatest joy in her life was her family and she cherished caring for and spending time with her husband and family.  She was a loving, caring and giving person and did many things to help her family and many others.  She especially loved being with her grand and great-grandchildren.
Mrs. Dempsey is preceded in passing by  her loving husband, Comer Dempsey,  her parents, William Hayes Morgan, Mary Ressie White Morgan, brothers, Rollen Morgan, Billy White Morgan, Brady "Buddy" Morgan, and Robert Lee Morgan,  And her two Sisters, Lena "Sis" Lowthorp , Mildred Swackhamer.
Ethel is survived by her children, Cathy Wilkinson and her husband Hilbert of Warrenton, VA., Rodney Dempsey and his wife Karen of Lynchburg, VA., and Patsy Rowe and her husband Bob of Cleveland, MS.
She had eight grandchildren, Hugh Krutz  (Alethea) of Brandon, MS., Brett Wilkinson (Sarah) of Richmond, VA., Brian Dempsey (Ellen) of Nashville, TN., Rachel Caprio (Matthew) of Seattle, WA., Brandon Dempsey (Kyle) of Murfreesboro TN., Amy Rowe of Cleveland, MS., Dustin Rowe (Kaitlin) of Cleveland, MS., and Patrick Dempsey of Murfreesboro, TN.  She also leaves nine great-children, Miles and Reed Caprio of Seattle, WA., Vivian and Dylan Dempsey of Murfreesboro, TN., Hill, Evelyn and Cole Wilkinson of Richmond, VA., Wyatt Krutz of Brandon, MS., and Brody Rowe of Cleveland, MS.
In lieu of flowers, donations may be made to the First Baptist Church of Cleveland, MS.

To order memorial trees or send flowers to the family in memory of Ethel Bell Dempsey, please visit our flower store.
Send a Sympathy Card