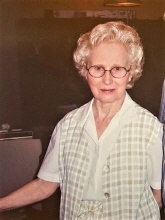 Eunice Lott Sanders Cleveland, MS Mrs. Eunice Lott Sanders 93, of Cleveland, MS was called home to be with the Lord on October 31, 2020. A Private Graveside Service will be held Monday at the Delta Memorial Heights Cemetery .
Mrs. Eunice was born on November 10, 1926 to Molly & Jim Lott in Gunnison, MS. She married Lero Sanders on February 14, 1942. They were married for 75 years until his passing in 2017. Mrs. Eunice worked at Ruleville Manufacturing before starting to work at Baxter Medical Lab in 1954 where she worked for thirty seven years. After her retirement in 1991 she began to do sewing alterations at home. She enjoyed going to church, and she loved spending time with her grand children and the rest of her family.
Mrs. Eunice is preceded in passing by her husband, her parents, two sisters, two brothers, stepfather& two stepbrothers.
She is survived by her three daughters, Rachel Tounzen, Carolyn Webster (Oscar)., Linda Stevenson (Dan)., 9 grandchildren, 25 great grandchildren, one great great grandchild., two sisters, Rhee Tubbs(Danny)., Naomi Stephens (Scott)., and many nieces & nephews and a special nephew, Jim Nail.
The family wishes memorials to be made to the Cleveland Church of God located at 4101 Hwy 8 East, Cleveland, MS 38732 Pastor. Greg Chamblee will officiate the service.

To order memorial trees or send flowers to the family in memory of Eunice Sanders, please visit our flower store.