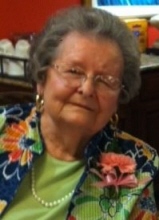 Mrs. Searcy was born April 12, 1928, in Shaw to Thelma Scroggins Sanderson and Henry Bernard Sanderson.  She married Wesley Ray Searcy, her high school sweetheart, on August 18, 1948. They were married for over 49 years at the time of his death in 1998.

She was retired from Baxter in Cleveland, Mississippi, and was a member of Shaw United Methodist Church and the American Legion Auxiliary.

Mrs. Searcy was preceded in death by her parents, her husband, and her son James Wesley Searcy.

"Our homeland is in heaven" Philippians 3:20

To order memorial trees or send flowers to the family in memory of Faye Sanderson Searcy, please visit our flower store.