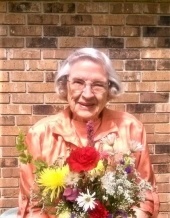 Florence "Flo" Marion Dixon Findley, 97, of Cleveland, Mississippi, went home to be with the LORD on April 6, 2021. She passed away in her home with family and loved ones by her side. The visitation honoring Mrs.Florence will be held Friday, April 09, 2021 at the First United Methodist Church from 1-2:00pm with a Celebration of Life memorial service to follow. Florence was born in Mifflin, Wisconsin, to William and Myrtle Dixon on February 22, 1924. Her father was a music teacher and band director, which led to numerous school changes through her growing years. She studied bookkeeping in high school and one year of college, which was interrupted by the necessity to work after World War II began. While living in Springfield, Illinois, she was blessed to meet a young sailor, Emmett Findley. While Emmett went to Okinawa as a Navy Seabee, Florence and her parents moved to San Jose, California, for work opportunities. In October 1944, Florence and Emmett married. After the war ended, they started their married life together in Paris, Illinois. After eight years, they had had enough of the cold Illinois winters and decided to purchase a farm in Gunnison, Mississippi. With three young sons in tow, they started their life of farming with Florence "keeping the books." They would soon have a daughter, making their family of six complete. After her husband's death in 1998, Florence left Gunnison to make Cleveland her final home and First United Methodist her church home. In her later years, Florence was blessed to have the late AV Henry as her friend and companion until his passing in 2020. Florence is preceded in death by her parents, three siblings, husband Emmett, son Richard, and granddaughter Jennifer Logan. Florence is survived by her son Allen (Janice) of Madison, MS, daughter-in-law Phylis of Madison, MS, son Bill (Paula) of Cleveland, MS, and daughter Lorraine of Richland, MS. Her grandchildren include Bunny Beilman (Peter) of Winston-Salem, NC, Mary Kelly Branning (Jason) of Jackson, MS, Erin Miller (Ryan) of Oxford, MS, James Findley (Melissa) of Madison, MS, Courtney Matthews (Brad) of Pearl, MS, Matt Arendale (Jessica) of Saltillo, MS, Laura Behr (Zack) of Lafayette Hills, PA, Leanne Robinson (Randy) of Yazoo City, MS, Laura Katherine Tannehill (Josh) of Jackson, and sixteen great grandchildren. The family wishes to extend their heartfelt gratitude to Paula Dakin, Anne and John Henry, and Diane Horton for their endless love and support of Florence. In lieu of flowers, the family suggests making donations to First United Methodist Church of Cleveland, MS, or the organization of your choosing.

To order memorial trees or send flowers to the family in memory of Flo Findley, please visit our flower store.