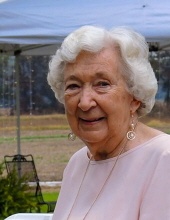 A memorial service will be held at a later date.

Mary Frances Mitchell Aiken was born September 24, 1931 to Robert Earl and Ruby Moselle Mitchell. She was one of six children and grew up in rural Duncan, Mississippi. She attended Duncan High School where she played clarinet and was valedictorian of her senior class. She he married James Harold Aiken and they had two children, Dennis and Sally. She later became a grandmother to four grandsons and two granddaughters and great-grandmother to 6.

Frances worked many years as a secretary for the architectural firm Brewer, Goldbold & Associates and later as a bookkeeper for Heaton Farms, both in Clarksdale. She also was quite the seamstress and made beautiful dresses, dance costumes and doll clothes for many, many folks. She moved to Cleveland at the age of 65 when she "retired" and quickly started working in "The Commons" and then "Delta Landing". She continued as a seamstress until late in her 80s making beautiful doll clothes and "walker pockets".

To order memorial trees or send flowers to the family in memory of Francis Aiken, please visit our flower store.