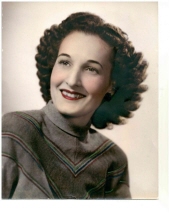 Gennie Ferretti Paxton, 98 of Shaw, Mississippi, passed away January 7, 2016, at her home. Visitation will be Sunday, January 10, 2016, from 4:00 p.m. - 5:00 p.m. at St Francis of Assisi Catholic Church in Shaw followed by a Rosary at 5:00 p.m. Funeral Mass will be Monday, January, 11, 2016, at 10:00 a.m. at St. Francis of Assisi Catholic Church in Shaw, MS, with Father Tom Mullally officiating. Interment will follow in Shaw Cemetery. Ms. Paxton was born on August, 9, 1917, in Shaw, Mississippi. She was employed at Pantaze Drugs in Memphis, TN, for many years. After leaving Pantaze Drugs she joined Walgreen Drugs until retirement in 1979. She worked in the cosmetic and vitamin departments for over thirty two years where she received numerous awards for her top sales.
Gennie was an active member of St. Francis Church and the Ladies Alter Society. She had a love for baking her Italian cookies and sharing with many people, which included the the paper boy to the bank president. She was a born saleswoman and looked forward to selling spaghetti tickets for the church's annual spaghetti supper.
Ms. Paxton is preceded in death by her parents, Mr. & Mrs. Enrico Ferretti; brothers, Gay Ferretti and Gee Ferretti; sisters, Deina Sandroni and Cherry Cascio; and nephew, Stan Sandroni. Ms. Paxton is survived by her sister, Virginia Stockard (Don) of Plano, TX, and brother in law, Phillip Cascio of Greenville, MS. She also leaves 16 nieces and nephews and numerous great nieces and nephews.
Pallbearers will be Anthony Ferretti, Blake Ferretti, Michael Ferretti, Todd Ferretti, Bert Mann, and Don Stockard. In Lieu of Flowers please make donations to St. Francis of Assisi Catholic Church in Shaw, MS.

To order memorial trees or send flowers to the family in memory of Gennie Paxton, please visit our flower store.