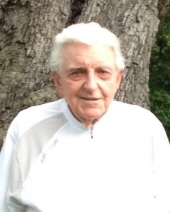 Mr. George Lake DeLoach, Jr., 93, of Cleveland, passed away on Monday, November 12, 2018, at his home.  A Graveside Celebration of his life will be at 11:00 a.m. Friday, November 16, 2018, in Evergreen Cemetery in North Carrollton, MS, with Rev. Brad Beckwith and Rev. Milton Burd officiating.
George was born in Carroll County in the Jefferson community on February 24, 1925, to George Lake DeLoach, Sr. and Helen Neal DeLoach.  In 1941 at age 17, he graduated from J.Z. George High School.  After graduation, he was employed by Glenn L. Martin Aircraft Company in Baltimore, MD, where he built dive bombers for the lend-lease program during WWII.
Furthering his education in 1943, he joined the US Navy where he was assigned to the V12 program at Notre Dame University completing his Bachelor of Naval Science Degree with a major in Mechanical Engineering in 1946.  He then was commissioned as an Ensign in the US Navy and served in the Pacific until 1947.  Upon his return home, he attended Mississippi State University where he was a member of Tau Beta Pi honorary engineering fraternity and graduated in 1949 with a Bachelor of Science degree in Electrical Engineering.
Upon graduation, he was employed by Mississippi Power Light Company, later Entergy, in the electrical engineering department working in Jackson, Durant, and Cleveland from 1949 to 1990 when he retired. For sixty-six years he was devoted to his beloved wife, Sara Nelle Alston, of Hollandale who blessed him with three children. While in Cleveland, George was a member of the Cleveland Noon Lion's Club; and in his spare time he was an avid golfer with the ability to par ambidextrously, and he loved Notre Dame and Mississippi State football.  As a devout Christian, he was a member of the First Baptist Church in Cleveland for fifty plus years and served as a deacon during his time there.
He is preceded in death by his wife, Sara Nelle Alston DeLoach; son, George Lake DeLoach, III; parents, George Lake DeLoach, Sr. and Helen Neal DeLoach; four brothers; and four sisters.
George is survived by his daughters, Sara Elizabeth DeLoach and Denise Goble; grandchildren, David Goble and Caroline Goble; and two sisters.
In lieu of flowers, the family request donations be made in his memory to First Baptist Church in Cleveland or the charity of your choice.

To order memorial trees or send flowers to the family in memory of George Lake DeLoach, Jr., please visit our flower store.
Send a Sympathy Card