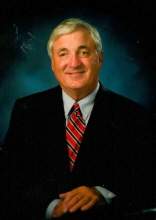 On September 8, 2018, GERALD HAGGART JACKS, died peacefully surrounded by his family following a brief illness. He was 74. A memorial service for Jacks will be 10:00 a.m Friday, September 14, 2018, at the family home at 1434 Township Road, Cleveland, MS.
Jacks, a native of Cleveland, was the senior partner in Jacks, Griffith and Luciano, a law firm he founded in 1984. He was a graduate of Millsaps College and the University of Mississippi School of Law.
Throughout his career, he has been active in numerous civic and Bar related activities. He was a past President of the Cleveland-Bolivar County Chamber of Commerce, past President of the Bolivar County Industrial Development Foundation, a retired member of the Cleveland Volunteer Fire Department, and a past member of the Board of Trustees of Millsaps College.
He was a member of the Mississippi Defense Lawyers Association, the Defense Research Institute, the International Association of Defense Counsel, and the American Bar Foundation. He was diplomat of the American Board of Trial Advocates and a Fellow of the American College of Trial Lawyers. The latter two memberships represent one of the highest professional honors a trial lawyer can receive.
Gerald served as speaker at numerous CLE seminars sponsored by the Mississippi Bar Association and other related Bar groups. He participated in teaching a trial practice class at the University of Mississippi School of Law each spring semester.
He also served as a member of the advisory committee appointed by the Senior Judge of the United States District Court in the Northern District of Mississippi to write the proposed uniform rules relating to discovery and pretrial procedure which were subsequently adopted by the Courts in the Northern and Southern Districts of the United States District Courts of Mississippi.
He was a member of the Board of Governors of the Fifth Circuit Bar Association and a member of the William C. Keady Chapter of American Inns of Court. He is listed as one of the top 50 lawyers in Mississippi by Super Lawyer Magazine.
While Gerald enjoyed much success in the courtroom, he would be the first to tell you his greatest love was Beth Boswell Jacks, his childhood sweetheart and wife of 52 years.  His proudest achievement was his four children, Emily Jacks Mosley (Don), Bethany Jacks Dowdy (Charles), Will Haggart Jacks (Jamie) and Thomas Gerald Jacks (Katie) and his grandchildren who brought him the greatest joy - Meredith and Caroline Mosley; Wayne, Beth, Jacks and Wilkins Dowdy; and Lila and Hanson Jacks. Gerald also cherished his sister, Miriam Jacks Kimbro (Tom) and the memory of his parents, Marjorie and Elber Lee Jacks.
Gerald also loved the great outdoors and staying active - skiing, horseback riding and golf were among his many passions. In addition, Gerald loved his church, St. Luke United Methodist.  Gerald and Beth were founding members of St. Luke, and Gerald remained active in the church serving in leadership positions.
In lieu of flowers, donations may be made to St. Luke United Methodist Church, the Gerald Jacks Scholarship in Law at the University of Mississippi, or the Athletic Department at Millsaps College.

To order memorial trees or send flowers to the family in memory of Gerald Haggart Jacks, please visit our flower store.