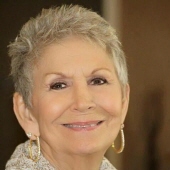 Mrs. Geraldine "Gerry" Earp Hill, 75, of Gunnison, passed away at Sunday, March 19, 2017, at her home. Visitation will be 1:00 to 2:00 p.m. Tuesday, March 21, 2017, at Ray Funeral Home. Memorial Services will immediately follow beginning at 2:00 p.m. Tuesday, March 21, 2017, at Ray Funeral Home with Rev. Allen Robison officiating. Mrs. Hill was born in Gunnison, MS, on February 15, 1942, to Marshall Ameil Earp and Joseph Prenella Alford Earp. She attended Gunnison Consolidate School until 1957, and while there she was a member of the basketball team and she won the American Legion Award as well as the Home Economics Award. She then attended Rosedale High School from 1957 to 1959 where she stayed active serving as captain of the basketball team, was a cheerleader, served at 4-H president, was FHA president, and won the Most Valuable Athlete award. After High school, she attended Colorado State University.
She married James M. "Jimmy" Hill in 1964 and they moved back to Gunnison in 1964 to form Earp & Hill, Inc., which was their timber business. Then in 1974, they began James M. Hill Farms. Mrs. Hill was a member of Gunnison Baptist Church who had a strong love for Christ. She loved horses and anything to do with them like competition rodeo and barrel racing. In her spare time she also enjoyed water skiing, growing gourds, and spending time with friends and family.
She is preceded in death by her parents, Marshall Ameil Earp and Joseph Prenella Alford; brother, Ameil Earp, Jr.; and sister, Sue Harris. Mrs. Hill is survived by her husband, James M. "Jimmy" Hill of Gunnison; daughters, Melissa D. Hill Harrison (Michael) of Florence, MS, Cassandra "Cassy" Corban (Charles) of Smithdale, MS, and Jamie Dupree Windham (Michael) of Florence, MS; grandchildren, Jessica A. Smith, Marshall Harrison, Maverick Harrison, Amelia J. Corban, and Maddie Jae Windham; sister, Rebecca Earp Whitt of Maumelle, AR; and sister-in-law, Diana Hill of Millington, TN. In lieu of flowers, the family requests donations made to St. Jude Children's Research Hospital and/or Blair E. Batson Children's Hospital.

To order memorial trees or send flowers to the family in memory of Geraldine Earp Hill, please visit our flower store.
Send a Sympathy Card