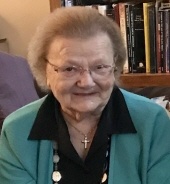 Glenda Loyce Hixson Braswell was welcomed into heaven on June 12, 2019. She was 85 years old, born to Glenn and Alta Richmond Hixson in Altheimer, Ark., on December 22, 1933. After moving several times with her family, she graduated from Merigold High School, Merigold, Miss., in 1951, and attended Delta State Teachers College until her marriage to Ralph Braswell in 1953. She worked as a secretary for the City of Cleveland Department of Public Works for 31 years before retiring.  In 2003, when she was 69, Glenda was appointed by the International Mission Board of the Southern Baptist Convention as a missionary to Guadalajara, Mexico, where she served for three years.
The two greatest joys of Glenda Braswell's life were ministering to people in obedience to her Lord and Savior, Jesus Christ, and spending time with her beloved family. Her life was focused on living out the Great Commission found in Matthew 28:19-20 by telling others about Jesus and pointing others to Him with her actions. In addition to serving as a missionary herself, she supported missions and missionaries all over the world through her work with the Baptist Women's Missionary Union on the local, associational, and state level; went on numerous mission trips all over the world; was instrumental in beginning the state Missionary Parents organizations; conducted countless Backyard Bible Clubs in several towns and countries; volunteered at Christian Women's Job Corps and the Women's Resource Center in Cleveland; helped found the Daughters of Dorcas ministry; encouraged international students at DSU; led women's Bible studies weekly; and was the Prayer Coordinator for Vacation Bible School at Calvary Baptist Church, where she was at the time of her stroke. She has been a mentor, spiritual mother, and prayer warrior for many people in Bolivar County, Mississippi, and around the world, and she will be greatly missed, especially by her family, who she loved wholeheartedly and prayed for diligently.
Glenda Braswell is preceded in death by her parents, Glenn and Alta Hixson; husband, Ralph Braswell; daughter, Loyce Braswell Miles; daughter-in-law, Carla Donahoe Braswell; brother, Wray Hixson; and sister-in-law, Peggy Hixson.
She is survived by her sons, Wayne Braswell (Cynthia) of Lexington, Ky., and Larry Braswell (Alicia) of Cleveland, Miss.; son-in-law, Hayes Miles of Madison, AL.; grandchildren Jennifer Miles Weston (Matt) of Memphis, Tenn., Jared Braswell of Oviedo, Fla., Cathryn Braswell Potter (Matthew) of Union, Ky., Beau Miles (Amy) of Madison, Ala., Stephen Braswell (Rachel) of Florence, Ky., Wray Braswell (Rachel)of Apex, N.C., Lisa Braswell Stephens (Trent) of Lexington, Ky., Drew Braswell of Brandon, Miss., Caitlyn Braswell Perkins (Garrett) of Cary, N.C., and Lucas Braswell (Reanne)of Cleveland, Miss.; 13 great-grandchildren with another on the way; and several nephews, nieces, and cousins.
Visitation for Glenda Braswell will be at Ray Funeral Home on Friday, June 14 from 6:00-8:00 p.m. and at Calvary Baptist Church on Saturday, June 15, from 9:00-10:00 a.m. before her Celebration of Life service there at 10:00 a.m.
In lieu of flowers, the family requests donations be made to Calvary Baptist Church, Cleveland, Miss., designated to the Lottie Moon Christmas Offering for International Missions.

To order memorial trees or send flowers to the family in memory of Glenda Loyce Hixson Braswell, please visit our flower store.