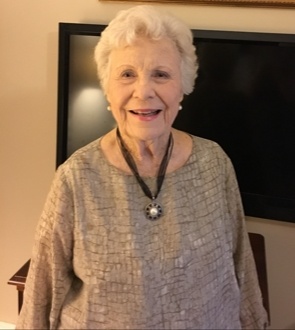 Gloria Griffith, a true Southern grandmother to many, passed away on March 31, 2022 at the age of 93 in her apartment at Indywood assisted living facility where she was surrounded by friends, new and old. Gloria is best described by her enduring relationships with others. Gloria was born in Greenville as the youngest child of Benjamin Elmo Smith and Mary Dennis Smith. She grew up there with her brother Ben and sister, Ernie as the world entered into and survived World War II. As time passed, Gloria’s parents, sister and brother passed away before her. With no formal discussion, she became the caregiver, matriarch, grandmother and great grandmother for her family. Gloria’s gentle and inclusive way nurtured others for her whole life.

After high school, Gloria attended Mississippi College where she was a beauty, a knock-out with an entire page in the annual. There, she first met a young veteran, Ellis Griffith, at a church meeting shortly after arriving on campus. Ellis adored Gloria for the rest of his life. The way Gloria and Ellis looked at each other is what we all wish for in life. After 38 years together, Ellis wrote to his children “We have a wonderful marriage (made in heaven!)”. Gloria joined him there early this morning.

After MC, Gloria and Ellis married in August of 1948 shortly before moving to Oxford where Ellis taught business law while attending Ole Miss Law School and Gloria began her Masters while teaching elementary school. The couple lived on-campus in married veteran housing joining many other couples for what both described to us as a magical and wonderful time in their lives. While in Oxford, Gloria and Ellis were joined by the first of five children, Lonnie Ellis Griffith, Jr.

After Ole Miss, Ellis was awarded a graduate assistant position and scholarship to attend tax school at New York University, but the lodging was for one and the term was for a year. Gloria took a teaching position in Greenville where she and Lonnie resided with her parents while Ellis entered school in New York. They missed each other terribly. Our brother Ben was a Beneficiary of this. In January of 1952, Gloria and Lonnie joined Ellis in New York where they lived in Greenwich Village on lower Manhattan and Lonnie saw much of New York from a baby stroller.

Ben was born that November after the couple moved to Cleveland. When the Griffith family arrived in Cleveland, the Baptists were in the midst of a church split. So, they started attending the First Presbyterian Church, as Gloria’s brother was a minister in that denomination. They liked it and joined. Both Gloria and Ellis were substantially involved in church activities in many ways raising their five children with that influence to the extent they would “take it”.

Gloria and Ellis found that their roots here grew so fast that they decided to make Cleveland their home. Ben was followed by Susan and Mary Kate as the couple “traded houses for extra space each time a new child was born!” The family enjoyed 10 years living in Boyle in the privacy of a secluded wooded area with two other families (the Muirs and Rogers) before building a larger house in a residential area of Cleveland. While living in Boyle, their fifth child, Dannywas born. The principal activities of the Griffith family were (a) raising children, (b) church work, (c) Boy Scout work, (d) PTA, (e) Lions Club work, (f) Junior Auxiliary work, and (g) professional work.

The Griffith family did extensive family camping until about 1975 when it began to taper off. The family camped in a rather primitive tent in the early years, graduating to pop-up campers with an air conditioner and heater, attached to a station wagon. The longest and best trips were to Disneyland, Disney World, Big Bend, Texas, Ozark and Great Smoky Mountain areas, Yellowstone, Yosemite, Severn Falls and adjoining areas of Canada, Niagara Falls, and the New Mexico-Arizona scenic areas. As the boys grew older, manpower for camping diminished. As Ellis explained in the mid80's “we fly and use hotels now!”

Racial integration of public schools began to intensify here as the family grew. Gloria and Ellis kept their children in public schools. As the nest began to empty, Gloria returned to Delta State to complete her Masters while teaching speech and directing senior plays at Cleveland High School. Gloria became active in promoting community theater with friends Kitty Eley and Nan Muir doing a musical titled “Whistlestop USA”. Gloria and Ellis began to take trips together without family. They found this to be new dimension in their experience together. They toured the Ozarks, Louisiana Cajun country, Mississippi and Louisiana antebellum plantations, Blue Ridge Parkway tours, visits to Hot Springs, a cruise up the inside passage to Canada and they followed the Ole Miss Rebels. Gloria and Ellis became avid Rebel fans during the Vaught era, which carried forward to them attending numerous sporting events, including 6 Ole Miss Sugar Bowl appearances together.

Grandchildren began to arrive. Fran, Beth and Clark were the first, so they got to pick. Gloria and Ellis became “Nana and Dendaddy”. Secondary to heart disease, Ellis passed away in 1987, but life continued.

Nana lived another lifetime without Ellis and we are now grateful she can be with the love of her life again. Nana remained active in the church, substitute teaching, community, and in the lives of her 11 grandchildren and 12 great grandchildren. For the first developmental years of their lives, Nana kept several of them during the day in lieu of day care. Nana was the sweetest soul that ever was, a true Southern lady, our matriarch. She always got a kick out of her grands calling her our very own Betty White! Nana was fierce, but sweet, loved her babies, loved her family and will be so missed. Nana’s condo was a welcoming place for her babies and their friends who simply knew her as their Nana as well. Through weddings, births, baptisms, plays, birthdays and sporting events Nana was there. There was rarely an Ole Miss football or basketball game when Nana would not be on the phone with Mary Kate or Danny, in good times and in bad. The memories are countless, “Honey, LSU is having their way with us, what is wrong with Houston Nutt?”

For a dozen years or more until his death, Nana had Bob Miller as her companion. Like Nana, Bob had lost his spouse of many years. Most every Friday night they had a regular date. They shared many holiday gatherings, weddings, and social events. A few short years ago when Bob passed away at 91, Nana was there to hold his hand and give reassurance. She remains a person held in the same esteem as grandmother and great grandmother for his family.

Look today on social media and you will see tight nit groups of grown-up girls posting photos of small gatherings, girl trips, and sometimes including the men in their lives. Nana and several of her best friends became known as “the Thimbles”, although none of us remember them doing much sewing. For over 50 years, the Thimbles enjoyed regular gatherings of just the girls and sometimes included the men in their lives. Life is not without sadness - a girlfriend passes after cancer, or another loses a child, husband, or companion. In sad times, Nana has explained “no matter what, a girl has her friends.” Nana is predeceased death by Thimbles, Sarah Nelle Deloach and Betty Rhett whom she missed greatly. Surviving members, Betty Thigpen, Margaret Walker, Bet Hubbell, and Mary Ann Odom will miss Nana greatly. Their families became her family.

More recently, Nana moved into an apartment at Indywood, another major transition in her life. Nana had a profound impact on those around her at Indywood. There, she shared the experience of COVID restrictions, making new friends and being a friend. Nana explained, who would believe that at this stage of my life I would be making some of the best friends I ever had. Nana was a true friend, encouraging those around her to interact and participate whenever possible. In these last years, Nana was no less gentle and inclusive than she had been her entire life. She will be deeply missed.

Our family would like to thank the staff at Indywood for treating Nana as family and give special thanks to North Sunflower Hospice for their role in helping Nana through her final transition of this life with comfort, dignity and grace.

To order memorial trees or send flowers to the family in memory of Gloria Judson Smith Griffith, please visit our flower store.
Send a Sympathy Card