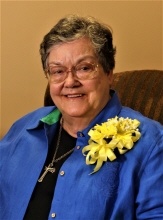 Mrs. Gloria Jean Guerieri McClellan, 86, of Cleveland, Mississippi, died Thursday, June 18, at her daughter's home in Olive Branch, Mississippi. To capture Gloria's true essence, you would have to know the stories of some of history's most influential women, people like Joan of Arc, Mother Teresa, Golda Meir, perhaps spiced with a few molecules of Wonder Woman. While she possessed slivers of each of their most inspirational and endearing traits, Gloria McClellan was, really, very practical and unpretentious. Gloria was charitable but firm, unwavering but flexible, possessed keen listening skills, was humorous, quick-witted and sharp, a straight shooter. Above all else, she was a devoted, caring and loving mother and wife, and devout catholic. She had to be a mixture of all those attributes -- she raised six big-hearted, loving children, all of whom at various times tested her patience via their rambunctiousness. Yet, Gloria did a valiant job instilling into them her best qualities -- love, patience, kindness and an unparalleled work ethic. Early in life she religiously paraded those six challenging children to the second row from the front on the left side of the church sanctuary "every" Sunday.
She had unwavering devotion to raising her six children and as many of her grandchildren to which she had access, and she loved attending their every event.
She always was the first teammate chosen when her children were selecting softball teams, for her strong right arm and her extremely loud whistle.
She was known for her famous cathead biscuits, Saturday fried chicken and Sunday spaghetti, and always finding a seat at the table for all of her children's friends, or strangers her husband met at his Texaco service station.
Upon losing her eyesight, she grew into one of the most dedicated prayer warriors of all times, praying continuously for her children, grandchildren, other family members as well as many in the Cleveland community. Gloria contributed to and was a loyal member of Our Lady of Victories Catholic Church in Cleveland, and if you dropped by the house (sometime after her daily breakfast outings and church visits), you would find her sitting at the family's big, oak kitchen table saying the rosary. Of course, in earlier years, she cooked enough food to feed her small army and anyone else who visited -- that's when she wasn't dedicating her time to volunteering at the Cleveland Hospital or at Delta State's Bologna Performing Arts Center. Gloria was passionate about helping others, one reason she worked on various OLV church committees, to include the food committee for funerals at the church, which she did for more than 50 years. Mrs. McClellan was born in South Plainfield, New Jersey, on September 27, 1933, to Frances Baratta Guerieri and John Guerieri as the seventh of 10 children.
She was preceded in death by her husband, Albert Polk McClellan and her grandson, Matt Gregory; her parents, John and Frances Guerieri, formerly of Cleveland; three brothers, Philip, George and John Guerieri; five sisters, Frances Byrd, Carmela DeFillipo, Anna Makowski, Dorothy Leinenbach, and Patricia Gary. She is survived by six children, Connie Hegwood (Pat) of Olive Branch, Valerie McClellan (David Johnston) of Madison, Bruce McClellan (Dianne) of Deville, Louisiana, Steve McClellan (Ladye Ann) of Little Rock, Jimmy McClellan (Connie) of Cleveland, and Aimee Coleman (Franklin) of Leland; one brother, Philip Guerieri of Fort Worth, Texas; 13 grandchildren, and 15 great-grandchildren. Pallbearers will be Blane McClellan, Jimmy McClellan, Tommy Braiser, Rian Frazier, AJ Frazier, Matt Gregory (posthumously), and Mark Frazier. Visitation will be at 10 a.m. Monday, June 22, at Our Lady of Victories Catholic Church in Cleveland, Mississippi. Mass of Christian Burial starts at 11 a.m., with Father Kent Bowls officiating. Interment will follow in Delta Heights Memorial Garden Cemetery. In Lieu of flowers the family wishes donations to be made to the building fund of Our Ladies of Victory Catholic Church.
Face masks are required to attend visitation and mass.

To order memorial trees or send flowers to the family in memory of Gloria McClellan, please visit our flower store.