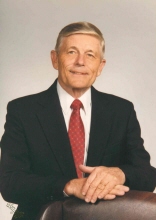 Mr. Hal Young Gerrard, 91, of Cleveland, passed away Monday, December 24, 2018, at his home. Visitation will be 12:00 to 2:00 Saturday, December 29, 2018, at First United Methodist Church in Cleveland followed by the funeral service beginning at 2:00 p.m. also at the church. Interment will be in New Cleveland Cemetery.
Hal Gerrard was born on July 28, 1927, in Benton, Mississippi, to Dennis Gerrard and Alice Redmond Gerrard.  He was one of five siblings and grew up in Yazoo County.  He was a veteran of World War II, having served in the U.S. Navy in the Pacific.  After the war, he returned to Mississippi and attended Sunflower Junior College and graduated from Delta State University in 1951 with a degree in Accounting.  He later earned his MBA at Delta State as well.  He moved to Cleveland, Mississippi in 1953 to work at Baxter Healthcare, where he served as Accounting Manager for 35 years until his retirement in 1987.  He was a member of First United Methodist Church in Cleveland for 65 years where he served on various committees, as Chairman of the Administrative Board, President of the Men's Bible Class and longtime Church Treasurer. He was a member of the Cleveland Exchange Club for more than 40 years and had held all leadership positions in the club, including President.  He was active as a volunteer with Habitat for Humanity, Meals on Wheels and in his Church.  He also loved golf and served on the Executive Board of the Delta Senior Golf Association for many years.  His main hobby was his family and he spent many happy days with his wife, children and grandchildren fishing and camping.
He is survived by his wife of 67 years, Nancy White Gerrard; four children, Jane Crump (Bill) of Schlater, MS; John Gerrard (Ruth) of Springdale, AR; Mary Pritchard of Oxford, MS; and Betsy Gerrard of Palm Bay, FL; seven grandchildren, Will Crump (Katy) of Brandon, MS; Josh Crump (Katie) of Jackson, MS; Tommy Pritchard (Audrey) of Oxford, MS; Rachel Felton (Kyle) of Poway, CA; Leslie Gerrard of Denver, CO; Nathan Pritchard (Jill) of Brandon, MS; Hal Pritchard (Mary Margaret) of Madison, MS.; two great-grandchildren; a sister, Dolores Shipley of Lafayette, LA; a sister-in-law, Bena White of Cleveland, MS; and a host of nieces and nephews.
Pallbearers will be his five grandsons and Joseph Crews.


A Celebration of Life Service

To order memorial trees or send flowers to the family in memory of Hal Young Gerrard, please visit our flower store.
Send a Sympathy Card