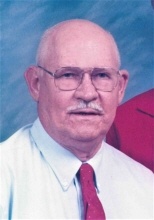 Howard Hooper went home to be with the Lord on March 18, 2021 in Cleveland, MS. A visitation will be held at Ray Funeral Home on Sunday, March 21, 2021 from 4 to 6 p.m. with another visitation on Monday from 10 to 11 a.m. A graveside service will follow at the New Cleveland Cemetery. Howard was born on June 9, 1933 in Merigold, MS to Roscoe and Gladys Hooper. He attended and graduated from Cleveland High School in 1951. After high school, he enlisted in the United States Army and served in Ft. Wolters, TX where he met his wife of 54 years. He married Patsy Walker in Weatherford, TX in 1955. After his tour in the military, he and his wife moved to Cleveland where he started his 44 year career with MS Power & Light, and later, Entergy. Howard and Pat enjoyed camping, at first with their children at Grenada, and after he retired, they went as far as California and Virginia. He was a good storyteller, always telling stories of the family. He loved his trucks, and especially enjoyed driving to Delta State baseball games, where he sat in the outfield with his closest friends and cheered the statesmen on. He was faithful to his church and to his family. He never met a stranger, and he was lovingly referred to by family as Uncle Losie. He would drive family members to appointments and to stores for their shopping trips. He enjoyed sitting in his swing under his carport watching Cleveland drive by. He is preceded in death by his loving wife, Patsy Hooper; parents, Roscoe and Gladys Hooper; brothers, Walter Brooks, Dick, and Phid; sisters, Rachel and Frances; and granddaughter, Brooke Mitchell. He is survived by his son, David Hooper (Susan); daughter, Brenda Mitchell (John); grandsons, Brent (Ryan) Mitchell and Kyle Mitchell; and great-grandson, Ethan Mitchell. In lieu of flowers, donations can be made to the Salvation Army or St. Jude Children's Research Hospital.

To order memorial trees or send flowers to the family in memory of Howard Hooper, please visit our flower store.