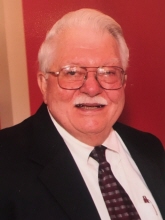 Howard L. Grittman, Jr., 86, of Drew, MS, passed away on Saturday, August 26, 2017, at Bolivar Medical Center in Cleveland. Visitation will be held from 1:00 to 2:00 p.m. on Monday, August 28, 2017, at Drew United Methodist Church. A Memorial Service will immediately follow beginning at 2:00 p.m. on Monday, August 28, 2017, at Drew United Methodist Church with Rev. Glenn Seefeld officiating.
Howard was born on October 28, 1930, to Howard Grittman, Sr. and Belle Penson Grittman in Sunflower County. On November 22, 1959, he married Martha Ann Farrish in Greenwood, MS. Howard proudly served our country in the Navy and upon returning from service, farmed the family land for thirty five years then worked for U.S. Postal Service for twenty three years before retiring. He was a member of Drew United Methodist Church and had a special place in his heart for his church family. He loved spending as much time outdoors as he could especially during hunting seasons. Howard was a kind and patient man who loved his family above all.
He is preceded in death by his parents, Howard and Belle Grittman.
Howard is survived by his beloved wife, Martha Ann Grittman; sons, James Allan Grittman (Cindy) and John Fred Grittman (Latisha); grandchildren, Anna McClain Grittman, Laura Lee Grittman, and Braden Southards; and sister, Mary Kathryn Herrington.
In Lieu of flowers, the family requests donations be made to Drew United Methodist Church.

To order memorial trees or send flowers to the family in memory of Howard L. Grittman, Jr., please visit our flower store.