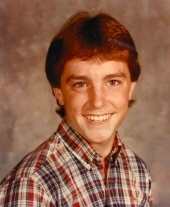 James Bradley Stone, 47, of Cleveland, passed away Wednesday, September 21, 2016, at Bolivar Medical Center. Visitation will be 1:00 to 2:00 p.m. Friday, September 23, 2016, at Our Lady of Victories Catholic Church. A Mass of Christian Burial will immediately follow beginning at 2:00 p.m. Friday, September 23, 2016, at Our Lady of Victories Catholic Church with Father Kent Bowlds officiating. Interment will be in North Cleveland Cemetery. Brad was born in Cleveland, on October 26, 1968, to Ernest O. Stone, Jr. and Mary Scott Stone. He attended Cleveland High School, and helped his Dad by volunteering at the Flight Service. He was a member of Cub Scouts, was a champion horseback rider, and enjoyed working on cars. He was always a clean-cut gentleman who was sociable and loved hanging out with friends.
He is preceded in death by his father, Ernest O. Stone, Jr. Brad is survived by his mother, Mary Stone-Lange of East Memphis, TN; step-father, Fred Lange of East Memphis, TN; sister, Jenifer Jenkins of Cleveland; brother, Alan Stone of Murfreesboro, TN; nieces, Brittany Stone, Faith Jenkins, and Natalie Jenkins all of Cleveland; great-nephews, Taylor and Rollie; aunts, Shirley Rogers of Vaiden, MS, Jerry Harkins of Kosciusko, Shirley Skinner of Vicksburg, and Mary Anne Peebles of LA; uncle, Ricky Stone (Sharon) of Cleveland; and numerous beloved extended family members. Pallbearers will be Brad Outzs, Davin Parker, Kevin Rogers, Bo Watson, Alan Stone, and Bruce Price. Honorary pallbearer is Bill Welch. In memory of Brad, the family requests donations made to Our Lady of Victories Catholic Church. The family would like to send a special thank you to the staff at Bolivar Medical Center Long Term Care for their kindness and dedication over the years.

To order memorial trees or send flowers to the family in memory of James Bradley Stone, please visit our flower store.