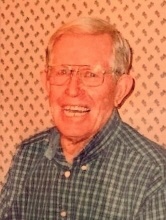 James Robert Clifton Benoit, MS James Robert Clifton was called home to be with the Lord on Sunday, February 28th, 2021 in Greenwood, MS. A Graveside service will be held on Wednesday, March 3rd, 2021 at 3:00 P.M. in the Shaw City Cemetery. Masks are required to attend service.
Robert was born on January 21st, 1923 in Dickson, TN to the late James Albert Clifton & Ruby Pearl Herbison. At a young age his family moved to the MS Delta where James attended school in Benoit at Benoit High School. He played on the championship football and baseball teams for Benoit High. James went on to join the United States Armed forces. He fought for our country in World War II. He received a Good Conduct Medal & EAME Theater Medal. After being honorably discharged from the military, he worked as a machinist at Texas Gas in Greenville, MS for over thirty years until retiring. Along with many other hobbies, Robert enjoyed working in carpentry and woodworking in which his father taught him the trade. Robert was a man who had to have something to do. In his spare time, he was an avid reader of his Bible and enjoyed his share of western movies and books. Most of all Robert cherished the time he had with his family and friends, and loved them dearly.
Robert is preceded in passing by his beloved wife Claudia Palmer Clifton, his parents, James Albert Clifton and Ruby Pearl Herbison Clifton, and one grandson, Grant Swales, and two brothers, John and Homer Clifton.
He is survived by his son, Robert D. Clifton of Milwaukee, WI, one daughter, Sherry Swales (William Dale) of Boyle, MS, one sister, Barbara Whittington (Dick) of Memphis, TN, three grandchildren, Jennifer Clifton (Mike) of Greensboro, NC, Traci Null (George) of Hattiesburg, MS, and Wesley Clifton (Kelly) of Milwaukee, WI, six great grandchildren, Ireland, Madelyn, and Cameryn Null and Henry, Linda, and Xander Clifton, and a host of loving nieces and nephews.

To order memorial trees or send flowers to the family in memory of James Robert Clifton, please visit our flower store.