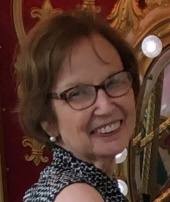 Jane Patton Peacock, 83, died peacefully on June 7, 2020, surrounded by her loving family. Jane was born on April 27, 1937 in Oxford, Mississippi, one of seven children of Enoch and Bernadine Ellis Patton. A graduate of Clarksdale High School in Clarksdale, Mississippi, Jane married Roy Alon Peacock on October 31, 1959. They settled in Cleveland, Mississippi in 1966 where they raised their three children. Jane was a member of the First Baptist Church in Cleveland, and later a member of Bellevue Baptist Church in Cordova, Tennessee. Jane had a passion for cooking, volunteering, and homemaking, and she enjoyed playing games such as Scrabble, for which she became regionally recognized. She was known for her quick wit, sweet giving spirit, and loving devotion to her family, friends, and church. Jane is survived by her sons Robert Brian Peacock (Dena) and Bradley Roy Peacock (Karen); daughter Jena Peacock Miller (Justin); grandchildren Chandler Peacock, Jackson Peacock, Janie Peacock, Vancie Peacock, Robby Peacock, Sims Miller, and Miles Miller; brothers Billy Patton, Edward Patton, and Jerry Patton; and sister Ruby Patton. She was preceded in death by her husband Roy, sister Martha McCarter (Patton), and brother Thomas (Buddy) Patton. Due to Covid-19, a Memorial Service will be scheduled for a later date so that family and friends may safely travel and attend. The family requests that, in lieu of flowers, donations may be made to The Alzheimer's Association (alz.org) in her loving memory.

To order memorial trees or send flowers to the family in memory of Jane Peacock, please visit our flower store.