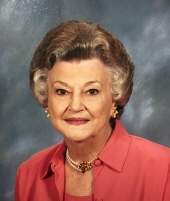 Jean Knott House of Cleveland, 89, peacefully passed away on October 15, 2016, in Jackson, Mississippi. Funeral services will be held on Wednesday, October 19, 2016, at First Presbyterian Church in Cleveland, Mississippi, with visitation at 10:00 a.m. and celebration of life services at 11:00 a.m. Jean was born on March 1, 1927, in Shelbyville, Tennessee, the daughter of William Bernard and Vassar Thompson Knott. Her childhood years were spent in Murfreesboro, Tennessee and Richmond, Virginia. After graduation from Thomas Jefferson High School in Richmond, she received a Bachelor of Science degree from Mary Washington College at the University of Virginia and a Master of Arts from Vanderbilt University's Peabody College. She completed advanced studies at the Wharton School of Business at the University of Pennsylvania. Jean moved to Cleveland, Mississippi, in 1949 to teach Accounting and Economics at Delta State College. As one of the first women teaching business education, she loved sharing her passion for finance with her students.
Jean met her future husband, Charles Pearce House, in Cleveland, and they were married on June 2, 1951. They enjoyed 57 years of marriage prior to his death in 2008. Jean worked alongside Charles as an officer in the family business, C. P. House Gas Company, for over 55 years.
Jean was active in the community, serving in various organizations including the Girl Scouts, the Chamber of Commerce, the United Way, and the Cleveland Women's Club. She was President and Regional Director for Junior Auxiliary of Cleveland and was a member of Kappa Delta sorority. Jean was a devoted member of First Presbyterian Church, where she taught Sunday School to many children and was President of the Women of the Church. She had a great love for Presbyterian Day School and spent many years as a board member working on the Building Program and Endowment Funds.
Jean and Charles loved to travel and visited many countries; they particularly enjoyed taking cruises with friends. She participated in bridge and investment clubs and was an avid investor who enjoyed following the stock market.
Jean was preceded in death by her parents, her husband, her sister, Jane Knott Chamberlain, and her sister-in-law, Mary House Crutchfield. She is survived by two daughters, Charlene House Doel (Jeff) of Lakeville, Massachusetts, and Mary Jean House Gates (Dennis) of Cleveland, Mississippi; three grandchildren, Will Gates (Kelsey) of Memphis, Tennessee, Jennifer Gates Ellis (Daniel) of Dallas, Texas, and Russell Doel of Lakeville; seven nieces, one nephew and her brother-in-law, Felix House of Rancho Mirage, California. Pallbearers will be Russell Doel, Daniel Ellis, Will Gates, Sid Law, Richard Linko, and Jim Pressler. Honorary pallbearers are Tommy Barrett, Dick Bolling, Jimmy House, Homer Sledge, Jr. and Nevin Sledge. The family would like to extend a special thank you to her caregivers, Ruby Hedgewood, Freddet Walker, Carolyn Williams, Ann Richardson, and Willie Ann Dorsey for their kind and loving care during her extended illness.
Memorials may be made to the C. P. House Family Scholarship Fund at Presbyterian Day School, First Presbyterian Church, or a charity of one's choice. To view and sign the online guestbook, go to www.rayfuneralhome.net

To order memorial trees or send flowers to the family in memory of Jean Knott House, please visit our flower store.