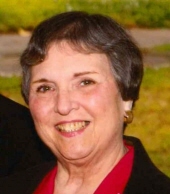 Jerry H. Burd (Granny Burd), 82, of Cleveland, died at her home on Thursday, April 20, 2017. Visitation will be 5:00 p.m. to 7:00 p.m. on Sunday, April 23, 2017, at Ray Funeral Home. A second visitation will be 1:00 p.m. to 2:00 p.m. Monday, April 24, 2017, at First Baptist Church in Cleveland, MS. Celebration of Life Services will immediately follow beginning at 2:00 p.m. Monday, April, 24, 2017, at First Baptist Church with Rev. Brad Beckwith and Rev. Macklyn Hubbell officiating. Interment will be in New Cleveland Cemetery. Jerry was born in Louisville, Kentucky, on October 2, 1934, to W.R. and Lilly Herman. She married Milton Burd on April 22, 1955. Jerry and Milton moved to Cleveland in 1963. After moving to Cleveland, she received a degree in Elementary Education from Delta State University. Jerry taught second grade at Parks Elementary School for 29 years. During her career, she left a positive influence on many children. Even after retirement, Jerry continued to share her gift of teaching by volunteering at Presbyterian Day School in the classroom and in the PDS library. Jerry was a faithful member of First Baptist Church for over 50 years and served in many different capacities. She taught the high school girls Sunday School class, started the Adult Singles Sunday School class, and served as the First Baptist Pre-school Director for over 30 years. Serving as Pre-school Director held a very special place in her heart. She lovingly became known to many pre-school children and families as, Granny Burd. Jerry was very active in the prayer ministry of First Baptist Church and faithfully wrote numerous prayer notes each week sharing words of encouragement to those in need. She was also an active member of the Six Up Senior Adult group. She enjoyed traveling with her church, family and friends. Jerry and Milton led many church youth trips over the years. She especially loved going on the annual summer youth trip to Nantahala, North Carolina. There she enjoyed rafting the Nantahala River, camping, and preparing meals for the youth and chaperons. She had a love for sports especially Mississippi State and Atlanta Braves. She also enjoyed participating in many Senior Adult trips. Jerry and Milton especially loved traveling with a group of dear friends known as the Merigold Supper Club. Friends and family were a very important part of Jerry's life. (Granny) dearly loved each one of her grandchildren and the feeling was certainly mutual. She would gladly tell stories about each grandchild and proudly share their accomplishments. She never missed an event or sports game that her grandchildren ever did. Many wonderful memories were made during family time together. Jerry is preceded in death by her parents W.R. and Lilly Herman, and by her brother Raymond Herman. Jerry is survived by her husband of 62 years, Milton Burd; son, Terry Burd (Diane); daughter, Cindy Stanford; four grandchildren, Brady Stanford (Ashley), Cliff Burd (Regan), Emily Stanford, David Burd; three great grandchildren Ellis, McRae, and Lawson; sister, Betty Prendergast (Marty); brother-in-law, Bob Burd (Joyce); and a host of nieces and nephews. She is also survived by her special caregiver and friend, Shondria Howard. In lieu of flowers, the family request that memorials be made to First Baptist Church or Presbyterian Day School.

To order memorial trees or send flowers to the family in memory of Jerry H Burd, please visit our flower store.
Send a Sympathy Card