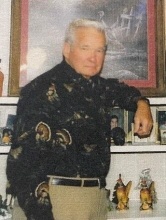 Jim Hunter McCaleb, 87, a Christian, family man, and active community member, passed on to be with his Lord on Wednesday, January 13 at his home with his wife of 62 years, Pat McCaleb, at his side. Fondly nicknamed "Goosh" to family, and Coach McCaleb to others, he fully believed in the Lord giving him his precious life, and exemplified the attitudes of family man, showman, and avid sportsman. Born in Lexington, MS on June 26, 1933, Jim Hunter grew up alongside his brother, "Shep," during their early years at Parchman penitentiary with their mother, Maude Linnell McCaleb, and stepfather, former Cleveland, MS alderman, B.Q. Davis. Jim excelled in multiple sports, as well as singing and dancing in his high school years, and went on to receive a football scholarship to Delta State University, where he was a member of the undefeated 1954-1955 Statesman team. Jim Hunter met Patricia Ann Naron at a dance in 1948, and they married after Pat completed her studies at nursing school in 1958. He would visit Pat on weekends while she was in school, and would ride the train. up to Memphis, TN from Denham Springs, LA, where he taught and coached from 1955-1960, and led the football, basketball, and track teams to many conference championships. After marrying, the pair returned to Cleveland, where Jim Hunter coached and in the Cleveland School District for eight years, and his coaching success continued. Jim was a nature-lover and wildlife enthusiast, and had many fond memories of time spent with his children and grandchildren at the Donaldson Point hunting camp. He was appointed to the MS Department of Wildlife and Conservation in 1980, where he enacted several state hunting safety measures still in effect today. He was an active member of various hunting and fishing groups, but his favorite pastime was taking friends and family into the woods to enjoy the surroundings. His greatest desire was to be a championship turkey hunter, and he accomplished it. Jim was an active member at First United Methodist Church, serving in multiple positions: Sunday School teacher, Administrative Board Member, and Committee chairman. He enjoyed singing tenor in the adult choir for 55 years. Jim was also an active participant in the Cleveland Rotary Club for 50 years, and a Paul Harris Fellow. He served as chairman twice, and sold more annual pancake breakfast tickets than other members thought possible! Jim is survived by his wife, Pat McCaleb; his daughter, Cristyn Holder (Bruce); his son-in-law, Mike Brister; four grandchildren, Naron Remillard (Jason), Collins Brister (Summer), Caleb Holder (Cassie), and Cade Holder; and one great-grandchild, Emma Lou Brister. He is preceded in death by his parents and step-parents, his brother, George Shepherd McCaleb, Jr., and his daughter, Caryn Brister. Jim Hunter was extremely proud of all four of his grandchildren: his granddaughter, Naron Brister Remillard, who came up with the endearing nickname "Goosh"; his grandson, Collins Brister, who rebuilt his Donaldson Point cabin after the flood of 2011; his granddaughter, Cade Holder, who often performed alongside him at church functions; and his grandson, Caleb Holder, who became an associate minister in the United Methodist Church, and often uses Jim Hunter's anecdotes in his sermons.

To order memorial trees or send flowers to the family in memory of Jim McCaleb, please visit our flower store.