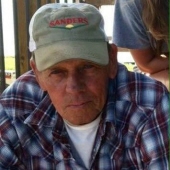 Mr. Jimmy Dale Adams, 73, of Cleveland, passed away Sunday, December 27, 2015, at his home. Visitation will be 1:00 to 2:00 p.m. Wednesday, December 30, 2015, at Ray Funeral Home. Celebration of Life services will immediately follow beginning at 2:00 p.m. Wednesday, December 30, 2015, at Ray Funeral Home with Bro. Larry Braswell officiating. Interment will be in North Cleveland Cemetery. Mr. Adams was born on February 7, 1942, in Dewitt, AR, to Norvell Adams and Belle Thigpen Adams. On December 15, 1962, he married Jo Ann Knowlton in Ethel, AR. He loved to work and spent 10 years working as a barber before becoming a farm manager. Farming was his passion and he spent his time working with Aylward Farms, Robertson Farms, and Robbins and Long Farms for a total of 40 plus years. After retirement, he worked part-time checking barges with Farmers Grain and Midsouth Grain. He was a dedicated worker and by setting this example, he set a good work ethic in his children. When not working, he enjoyed alone time. He was also an animal lover, and he enjoyed cattle and horses the most.
He is preceded in death by his parents, Norvell Adams and Belle Thigpen Adams; and brothers, Otis Adams and Tommy Adams. Mr. Adams is survived by his wife of 53 years, Jo Ann Adams of Cleveland; sons, Phil Adams (Lisa) of Boyle, Brad Adams (Robin) of Boyle, and Joe Adams (Heather) of Cleveland; 12 grandchildren; 5 great-grandchildren; sisters, Delma Latimer of Benton, AR, Gladys Theis-Carr of Dewitt, AR, Betty Cotner (Sammy) of Dewitt, AR, and Neva McKewan of Marion, AR; and a host of nieces, nephews, and beloved extended family. Pallbearers will be Andy Adams, Brent Adams, Barry Allen, Cody Lack, Payton Adams, Chris Robertson, and Harold Register. Honorary pallbearers will be Jim Robertson, Ray Travis, and Jimmy Frazier. In lieu of flowers, donations may be made to St. Jude Children's Research Hospital and/or Blair E. Batson Children's Hospital.

To order memorial trees or send flowers to the family in memory of Jimmy Dale Adams, please visit our flower store.
Send a Sympathy Card