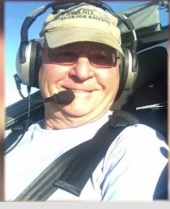 Joe Franklin Kulbeth, 76, of Fresno, CA, passed away Thursday, April 25, 2019, in Madera County, CA. A Graveside Service will be 10:00 a.m. Saturday, May 25, 2019, at New Cleveland Cemetery.
He was born April 20, 1943 in Warren Arkansas. He graduated from Cleveland High School in 1962 and went into the military where he served as a helicopter crew chief during the Vietnam War, for which he earned several awards.
Joe was a California Highway Patrolman for 25 years. Early in his career with the CHP, Joe certified as Pilot in Command with fixed wing operations in Coalinga and transferred to the CHP helicopter operations, located at Fresno Air Terminal, where he conducted search and rescue missions throughout the Sierra Nevada and Central Valley. After retiring from law enforcement, Joe became very involved in the Fresno aviation community; he was a certified instructor where he shared his love for flying with many students.
From early days, Joe was obsessed with aircraft; he was happiest when flying. He never knew a stranger, made friends everywhere he went.
Joe is preceded in death by his mother, Gracie Maxine Roark McDonald. Joe will be laid to rest beside her in his loved Mississippi.
Joe is survived by wife, Jean Kulbeth; brother, Jimmy Kulbeth (Loyce); sons, Robert Kulbeth (Sheila) of Stafford, Virginia, Dewayne Kulbeth of Colorado Springs, Colorado, and Jeff Taylor (Tami); daughters, Melanie Carter (Mike), Sharon Rice (Chris), and Michelle Rice (Doug); grandchildren, Hadley and Ryan Kulbeth, Lilliana and Ray Cortez (their mother Kristin Kulbeth), Jacob Taylor, Luke Taylor (Molly), Logan and Andrew Carter, Timothy and Hannah Leece; and many Roark/Saunders relatives.

To order memorial trees or send flowers to the family in memory of Joe Franklin Kulbeth, please visit our flower store.
Send a Sympathy Card