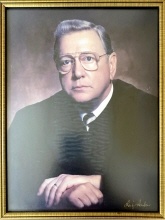 John LaFayette Pearson, III, 95, of Rosedale, Mississippi passed away Wednesday June 30, 2021, surrounded by family at home. A celebration of life service will be held at 11:00am on Monday July 05, 2021, at the family's home with a Graveside service following at the Beulah Cemetery. Born March 7, 1926, in Rosedale, Mississippi to the late John LaFayette Pearson, Jr and Evelyn Sillers Pearson.
John was a graduate of Georgia Military Academy in Atlanta, GA. He enlisted in the Navy and received his undergraduate degree and officer training at Tulane University, New Orleans, LA, and Northwestern in Chicago, IL. He served as Ensign in the United States Naval Corp in the Pacific. After World War II, he attended The University of Mississippi Law School where he received his Doctorate of Juris Prudence. Returning to his home of Rosedale, MS he married Sara Katherine Myres on February 12, 1955. They have 3 children, Katherine, Sara Dicken, and John LaFayette IV. John served as mayor of Rosedale from 1951 to 1957. He was a farmer and was awarded Farmer of the Year. He practiced law in Rosedale for many years. he served as attorney for the Bolivar County boards of supervisors, as well as West Bolivar County School board and attorney for the City of Rosedale. John was appointed delegate to the Naval War College in Newport, Rhode Island. He served in the Mississippi State Legislature from 1966 to 1980. During this time, he wrote the House Bill that named Delta State a university. He was an active proponent of creating the Port of Rosedale and The Great River Road State Park. John was elected Circuit Judge of Bolivar, Coahoma, Tunica, and Quitman counties. When he retired, he had served 44 years in public service.
John was a lifelong member of Rosedale United Methodist Church. He was a member of Rosedale Rotary Club. During this time, he was named a Harris Fellow for outstanding service by Rotary Club International. He was awarded the National Metal of Honor by Patricia Shelby, President General, National Society Daughters of the American Revolution. John enjoyed hunting at Beulah Island Hunting Club and Merigold Hunting Club. His hobbies included trap and skeet shooting. John was an avid golfer and participated in tournaments in the southeast.
He is survived by his wife Katherine Myres Pearson and their three children Katherine Pearson Crump, Sara Pearson Crump, and John Lafayette Pearson IV. He also leaves behind his grandchildren Sara Coleman Ghoreyeb, Robert Shields Crump Jr, Mary Coleman Farrell, Elizabeth Sillers Pearson, Florence Crump Martin, Lucy Coleman Kost. As well as his great grandchildren Thomas Francis Farrell III, Mary Sillers Farrell, Elliott Gray Farrell. Pallbearers are Robert Shields Crump Jr, George Harris Martin, Stuart Tulledge Farrell, Sami Elias Ghoreyeb, William Augustus Kost, Walter Sillers Weems Jr, David Alexander Weems. The family wishes all memorials be made to Rosedale United Methodist Church.

To order memorial trees or send flowers to the family in memory of John LaFayette Pearson III, please visit our flower store.