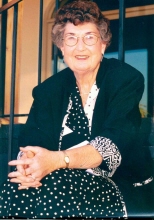 Mrs. Josephine Elizabeth "JoBeth" Williams Janoush died Sunday, June 28, 2015, at her home. A Memorial Service will be held on Tuesday, June 30 at 11:00 AM at First Baptist Church. Visitation will be held at the church Fellowship Hall prior to the service at 10:00 AM. JoBeth was born in Sunflower County on August 8, 1927, the daughter of the late Argus and Helen Patterson Williams of Moorhead. She graduated from Moorhead High School and received a degree in biology from Delta State College in 1948. She married A. T. "Tom" Janoush in 1948. JoBeth worked as a medical technician at the Ruleville Hospital for twenty years and, in 1960, she and Tom opened and operated The Commissary in downtown Cleveland. After selling The Commissary, she operated The Saturday Shop for several years before permanently retiring. JoBeth was an active member of First Baptist Church of Cleveland where she taught Sunday School, Bible School and served on many committees. She was often a chaperone on the church youth trips and was a dedicated member of the "Kitchen Crew" for many years. She was very active in the community, particularly in the development and beautification of downtown Cleveland. She was a member of the Cleveland-Bolivar County Chamber of Commerce and served as Vice President of its Marketing Council and on its Board of Directors. She was one of the founders of OctoberFest and a long-time member of the City Beautification Committee. She, along with Clemmie Collins and Jane Dunlap, started the "Light Up Your Holidays" program, putting white lights all over downtown Cleveland during the Christmas season. She was a Life Member of Junior Auxiliary of Cleveland and was Charity Ball Queen in 1986. She also was a member of the Delta Home and Garden Club, a Cub Scout den mother for years, a member of countless PTAs and Booster Clubs, and a member of the Golden Circle of the DSU Alumni Association. She received the Chamber's Kossman Award for outstanding volunteer service and was honored by the Ladies of Elegance for community service. One of her points of pride was that she was the mother of four Eagle Scouts, the grandmother of one Eagle Scout and the great-grandmother of another; and in 2008, the Janoush family was honored by the Chickasaw Council Boy Scouts of America with the Distinguished Citizen Award. She is preceded in death by her parents, her brother, Pat, and her husband, Tom. JoBeth is survived by her four sons; Brad (Pitty Pat) Janoush of Boise, Idaho, Joe (Dot) Janoush of Rosedale, John (Beverely) Janoush and Paul (Lucy) Janoush all of Cleveland; grandchildren Tom (Desira) Janoush of Cleveland, Dax Walker of Memphis, Will (Andrea) Janoush of Madison, Chelsea (John) Emerson of Portland, Maine, Jesse Walker of Memphis, Milton Walker of Aspen, Colorado, and Mary Parker Janoush of Cleveland; great-grandchildren, Alex Janoush and Coleman Warrington of Cleveland and Bradford Janoush of Madison. She is also survived by her nieces Ann Martin of Rosedale and Amy Burton of Brandon and her nephew Pat Williams of Lonoke, Arkansas and cousin Murray Williams of Desoto County. She is also survived by too many others to name because she treated so many as her own children or grandchildren. Special thanks to her friends and caretakers: Rosie Clinton, Jackie Scott, Jessie Drummer, and Wardine Fryery. Memorials may be made to First Baptist Church of Cleveland, the Boy Scouts of America, the American Cancer Society , the Cleveland City Beautification Committee or the charity of one's choice.

To order memorial trees or send flowers to the family in memory of Josephine Elizabeth 'JoBeth' Janoush, please visit our flower store.
Send a Sympathy Card