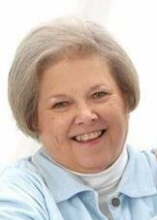 Mrs. Joyce Fursee Garrison, 70, of Cleveland, passed away at her home on Thursday, April 6, 2017. Visitation will be 5:00 to 7:00 p.m. Sunday, April 9, 2017, at Ray Funeral Home. Celebration of Life services will be 4:00 p.m. Monday, April 10, 2017, at Cleveland Church of Christ located at 212 Ronaldman Road with Brother Eddie Lewis, Brother Tim McCarter, and Brother John Gardner officiating. Interment will follow in North Cleveland Cemetery. Mrs. Garrison was born in Wessington Springs, South Dakota, on October 17, 1946, to Robert Fursee and Viola Fry Fursee. She achieved her undergraduate degree from Huron College in South Dakota, and she earned her Master's Degree in Education at the University of Alabama. While attending Huron College, she caught the eye of a handsome college professor named Joe Garrison, and the two were married on April 12, 1968 in Wessington Springs, SD. Shortly after, they moved to Tuscaloosa, Alabama, where she began her teaching career.
Mrs. Garrison had the privilege of being one of the first teachers at one of the first integrated school in Alabama. They later moved to Berea, Kentucky, where she taught at Mt. Vernon School. In 1975, they moved to Cleveland, Mississippi, where she taught at Bayou Academy for two years, and in 1978, she began her 39 years of dedication to Presbyterian Day School as a fifth grade teacher. Mrs. Garrison was a charter member of the Alpha Sigma chapter of Delta Kappa Gamma and held several offices including president in this educational organization. She also received numerous awards and recognitions, which included being the longest serving teacher at PDS. During her tenure at PDS, she was instrumental in creating the summer program, after school program, and served on the staff development committee. A faithful woman, Mrs. Garrison loved and served the Lord with all of her being. She attended the Cleveland Church of Christ and taught the Ladies Bible Class for many years, was very involved in their Ladies' Days, organized the coat drive to benefit several elementary schools, and served in whatever areas that arose. She volunteered at the Pregnancy Crisis Center, loved cooking for others, and opening her home to have people over to eat. She delighted in keeping up with formers students and was always so proud of all of their accomplishments. She treasured talking to her children and grandchildren each day, and the time they were able to spend together was deeply cherished. She is preceded in death by parents, Robert and Viola Fursee; and her husband of 47 years, Dr. Ronald Joseph "Joe" Garrison. Mrs. Garrison is survived by her daughter, Danna Pritchard (Dave) of Hudson, WI; son, Dr. Curtis B. Garrison (Beth) of Meadville, PA; grandchildren, Kevin and Rachel May of Hudson, WI, and Aubrey and Rylan Garrison of Meadville, PA; her constant companion, Ginger; and a host of beloved colleagues, students, and friends. Pallbearers will be Kevin May, Rylan Garrison, Will Sledge, Stuart Varner, Scott Varner, Carlton Edmondson, and Mark Boone. Honorary pallbearers will be Eddie Lewis, John Gardner, Tim McCarter, David Walt, and Edward McKnight. Memorials can be made out to the PDS scholarship fund.

To order memorial trees or send flowers to the family in memory of Joyce Fursee Garrison, please visit our flower store.